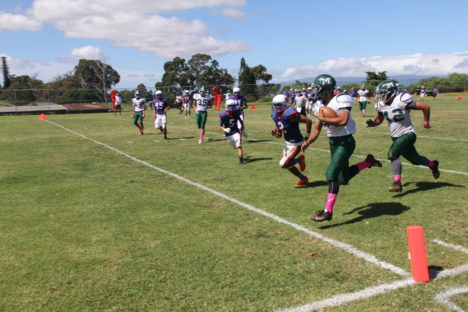 By Rick Schonely, Sports Reporter
The Molokai Farmers eight man football team secured the top seed in the playoffs and a 3-0 undefeated season with convincing 49-21 road win at Seabury Hall last Saturday. The Farmers will now host a semi-final playoff game against Hana on Oct. 22.
Senior quarterback Jayden Dudoit-Tabilangan led the Farmers with 162 yards passing and four touchdown passes. He also ran for one touch down. Freshman Nalima Puaa-Aki ran for 67 yards on 12 carries and also caught two passes for 62 yards and one touch down. Senior Decker Bicoy had two touch down catches and played well on defense also. Keolewa Davis-Mendija had seven carries for 51 yards and caught three passes for 44yards.
Head Coach Mike Kahale was happy with his team’s performance on the road at their rival Seabury.
“I was very pleased with our balance on offense,” he said. “We took the opportunity to throw the ball more as we expected that Seabury would bring extra guys up defensively to stop the run.”
Kahale also praised Dudoit-Tabilangan.
“Our quarterback, Jayden Dudoit-Tabilangan gives us a lot options because he is so mobile. If our guys are not open, he can run the ball and use his speed to get us some yards.”
Senior free safety and wide receiver Bicoy and his teammates were looking forward to this game but he said he understands the team will have to keep preparing for the playoffs.
“The game against Seabury is always one to look forward to,” said Bicoy. “Everybody played hard and I’m proud of the younger guys on our team who stepped up. Our big boys up front also did an awesome job. Seabury is a good team and played hard, but we came out victorious. Now we get back to work and prepare for our next game.”
Kahale praised his players and their growth on the team.
“This game required some of our younger guys to step on both sides of the ball,” he explained. “Freshman Puaa-Aki filled in nicely as one of our starting backs and Landen Kaneakua played big for us at corner in our secondary. Davis-Mendija ran the ball well and Bicoy caught some nice long passes from Jayden. A lot of credit goes to our offensive line as they provided good pass protection and opened up some big holes for our backs.”
Seabury will host Lanai in the other semi-final game and the MIL eight man championship is at War Memorial Stadium on Maui on Oct. 27.
“The harder you work for something, the greater you’ll feel when you achieve it!” said Dudoit-Tabilangan.