Football to Play King K in Season’s Only Matchup 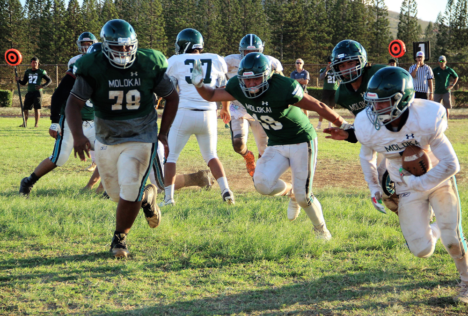 The Molokai High eight-man Football team has been practicing since the new school year started in August. After a shutdown for a bit because of new pandemic regulations, they resumed practice in September, hoping for a season and the chance to win their sixth straight MIL title. But things again hit a roadblock for the team, with Maui Interscholastic League play essentially getting cancelled.

“When Hana cancelled their season early on, and then we got word from Lanai the day after our first Green and White scrimmage that they had cancelled as well,” explained Head Coach Mike Kahale. “We were hoping for at least a home and away [game] at Lanai. It was really disappointing, but something that was out of our control.”

Kahale then started to look for some games for his team.

“That evening, I scrambled and looked at different league schedules on Oahu, Big Island and Maui and we reached out to many,” he said. “We got some responses from some Athletic Directors and coaches: Waialua on Oahu and Kohala on the Big Island but only King Kekaulike on Maui was available and confirmed… Coach Tyson Valle from King Kekaulike was open to host us and we let our respective Athletic Directors work out some of the details.”

Though the school isn’t in the same division for an official game, the Farmers will travel to Maui on Friday, Nov. 12 for a controlled scrimmage with King K.

“We had talked about an exhibition game but there are other MIL football games that night and having the correct number of officials would be a challenge,” said Kahale. “I was OK with that since we needed to make our transition and start practicing for an 11-man matchup. A scrimmage will allow us to focus on implementing new offensive and defensive schemes, with no special teams play.”

Kahale and his staff and players have worked very hard during these tough times and the opportunity to travel for at least on road trip this season is special.

“We really want to extend our gratitude to Coach Tyson and athletic director Patrick Higa of King Kekaulike,” he said. “This final matchup of the season gave our boys and our staff a renewed enthusiasm and excitement to play one final game.”

“I’m happy for our boys, especially our seniors,” said Kahale. “So much of their high school sports career has been taken from them already and we almost did not have a season again. I’m hoping that this one and only final road trip will build memories that they can cherish for a lifetime.”