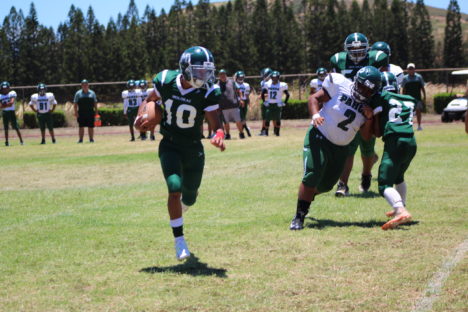 The Molokai’s eight-man football team kicked off their 2017 season last weekend with a preseason game against the Pahoa Daggers from Hawaii Island on Molokai’s home field. A great crowd came out to support the Farmers and saw an exciting game that ended with Pahoa on top 32-27.

Molokai led 20-12 at the half and took the lead back from the Daggers 27-26 late in the fourth quarter on sophomore Kaimana Nakayama’s 75 yard touchdown pass reception from quarterback Shraedon Naeole-Starkey. Pahoa’s senior Keala Harris then broke a 65 yard touchdown run for the final score. Harris scored threetouchdowns in the game. Molokai senior running back Hau`oli Caparida had two rushing touchdowns and Naeole-Starkey also had a rushing touchdown.

Caparida, one of the team’s captains, knows it was just their first game and the team will get better.

“I think that game was in our hands and up for grabs but too much mistakes were happening,” he said. “It’s just our first game and mistakes are going to happen. Now we can work on that and become better. Our team is young and… the young ones have to step up.” 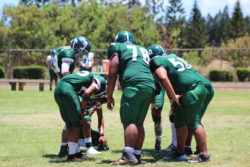 “Saturday’s game against Pahoa was typical of a preseason game where there were a lot of mistakes and miscues,” he said. “Unfortunately, we made a lot of them which ultimately cost us the game.  Our hats off to Pahoa as they played with grit and determination and overcame adversity and injury as well.”

Molokai will travel to Hawaii Island this weekend to face the Kohala Cowboys in another preseason game before starting their MIL regular season at home on Sept. 9 against Seabury. After that, they will play Lanai at home on Sept. 16 and travel to Maui to face Hana on Sept. 21. The MIL Eight-Man Championship Game is scheduled for Sept. 30, and the Farmers can host that game this year if they are the number one seed. The Farmers are the two-time defending MIL eight-man Football Champions and will try for three in a row this season.

“We have over 20 first year players who have never played football before,” he said. “They just need more reps in practice to be ready for the game day.  We look forward to what lies ahead.”