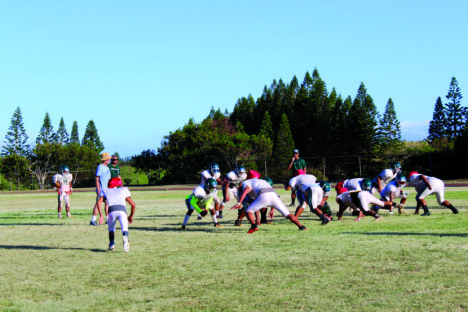 The Molokai Farmers eight-man football team kicks off its preseason with a home game against Pahoa this Saturday at 11 a.m. at the MHS Field. The Farmers are the two-time defending Maui Interscholastic League champions and Head Coach Mike Kahale has had his team practicing and getting ready for the upcoming season.

“Practice has been going well and we officially started on July 24 and have about 40 athletes out,” he said. “We had a productive summer as well with about 30 boys turning out for volunteer workouts. We are a team in transition and we are still trying to find our identity after losing 16 seniors last year.”

Kahale said this year’s young team consists of about 30 freshman and sophomores, with just a handful of juniors and seniors.

After their home game, the Farmers will travel to Kohala for another preseason game on Aug. 19 before starting their regular season at home against Seabury on Sept. 9. Molokai will also host Lanai on Sept.16 before traveling to Maui to face Hana at War Memorial Stadium on Sept. 21.

Kahale, his coaching staff and his team have set some goals for this season.

“Our goal is to repeat as league champs and a three-peat would be cool,” he said. “We lost a lot last year with 16 athletes graduating and our incoming senior class is the smallest we’ve ever had with about five athletes returning. It will be a challenge, but one that we look forward to.” 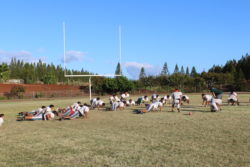 Molokai has a chance to win a third straight championship if all goes as planned this season. Kahale said if the team can win all their games to secure the number one seed, Molokai will be able to host the MIL Championship on Sept. 30.

Returning all stars include Hauoli Caparida, who will play a big role as a running back, and Kekama Naeole Starkey, a receiver who will fill in multiple spots as a utility player.

“This season we have a young team and I feel like people really have to step up,” said Caparida. “We only have a couple of seniors and a couple of juniors but I feel like we have a lot of talent and we’re improving every day, not just only football wise but attitude and discipline also. We have a great season ahead of us.”

Also expected to shine this year on the offensive line is Kahakea “Pups” Tilini, a senior transfer from Arizona who moved back to Molokai with his family.