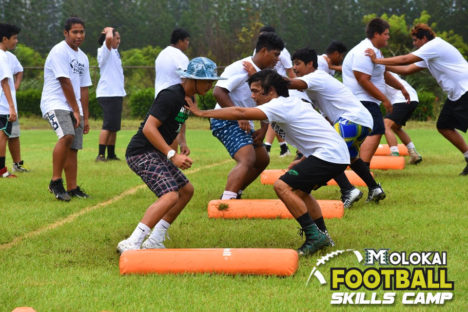 Touchdown! Molokai youth interested in football have an amazing opportunity to up their game next week. The second Football Skills Camp, brought to the island by Molokai High alum Ry Akana and his Washington State-based company Akana Athletics, is bringing a lineup of top coaches and athletes to kickstart skills and excitement for the sport.

“The camp is an amazing opportunity for our youth to get feedback from great coaches and former NFL athletes,” said Molokai High Head Football Coach Mike Kahale. “It also will give our high school coaching staff a chance to rub elbows with these coaches and improve our skill set.  Most times camps like these cost a lot of money and have the added of expense of travel and lodging off-island.  I’m really appreciative of Coach Ry and the entire Akana Athletics group for giving back and providing this camp here on island.”

“We just heard nothing but good things from parents, and the buzz around the island when we did that, was so great,” Akana said. “So we said, ‘We gotta keep doing it, make it annual thing.’ Then COVID hit. We’re just so excited to come back.”

Akana knows how tough it can be getting opportunities like this on Molokai.

“We’re from Molokai, we get it — families don’t have resources to send kids to the mainland and attend these large camps,” Akana said of the initial vision for the camp. “We were like, ‘Why can’t we bring it to Molokai so kids don’t have to do that?’”

In addition to the logistical challenges athletes face on the island, the COVID pandemic has made it even tougher to stay engaged in sports.

“Our athletes have lost out on so much with regard to high school athletics and participation in youth sports the past couple of years,” said Kahale. “We are hoping that this camp is a ‘kick start’ and will re-energize the interest in football here on Molokai.”

Coming to Molokai June 27-28 from 9 a.m. to 4 p.m. at the Molokai High School field   for ages 8-17, Akana brings an impressive lineup of talent, highlighting those in the sport with Molokai roots.

At the top of the list, Molokai High alum and former NFL defensive tackle Kimo von Oelhoffen serves as a “poster child” for the potential of Molokai athletes, said Akana. Other coaches will include Chris Naeole, coach and former NFL player with Molokai ties, Dominic Raiola, former NFL center from Honolulu, and a lineup of current high school football standouts from Hawaii.

Everyone is coming on a volunteer basis and providing the camp free for Molokai youth, with the community offering kokua, said Akana.

The camp will be divided into two age groups – ages 8 to 12, and older athletes – and morning and afternoon sessions. Morning sessions will focus on speed, agility and explosiveness, as well as fundamentals of catching, blocking, offence and defense, said Akana. Afternoons will focus on technical coaching specific to the needs of the Molokai football program.

As of last Saturday, about 120 kids were registered.

“[Molokai kids] really don’t know the culture of football, only what they see on TV,” he said. “The sport really has a lot of lessons you can learn in life through the game and that’s what we’re trying to teach as well. You gotta be disciplined, you gotta work hard, you gotta persevere through pain. Those are the things we’re going to drive and teach them as well.”

Akana and his brother Stanton have been coaching football for decades.

“My older brother Stanton was Kamehameha Schools standout football player, and I grew up wanting to be like him,” recalls Akana. “I started playing and then when we moved to Molokai [when he was in seventh grade], all my dreams just kinda shattered. I always hoped Molokai would have a football team when I was in high school there but it never happened. But I was so passionate about the game and I knew I wanted to try and pursue it anyway I could.”

Though Akana was recruited for college football, it didn’t pan out for him due to league technicalities. So instead he found his place in the sport as a coach, passing on his love of football in Utah and Washington State, starting his comprehensive sports development business with his brothers Stanton, Jarrin and Brandyn.

“We love our island so much,” he said. “We’ve been away for a while but our heart is always there.”

Akana wants to thank those in the Molokai community who have come together to volunteer assistance for the camp, such as Shirley Rawlins and Moana’s Hula Halau donating lunches for the kids. At the end of the day, it’s all about giving back to Molokai’s youth.

“If we can just help them realize even though you’re on a small island, you do your part, you work hard, you will get noticed,” he said. “If they stay true to themselves, work hard, listen to your coaches and you’ll find success. We change the life of one kid at camp and it’s a success for us.”

Boys and girls with an interest in football can register for the Football Skills Camp at akanaathletics.com but walk-ins are also welcome.