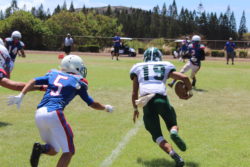 The Molokai Farmers Football team started their regular season and their quest for a Maui Interscholastic League Championship three-peat with a 35-26 win over rival Seabury Hall last Saturday at the MHS field. It was the first game with a newly installed football scoreboard, and large crowd was on hand to support the Farmers. Molokai was led by senior quarterback Shraedon Naeole-Starkey who threw three touchdown passes and ran for another touchdown. Sophomore Kaimana Nakayama caught two touchdown passes and was also successful on all five extra points. Senior Braiden Asuncion and Junior Jayse Lalim-Rillon had touchdown runs also, while junior Chevy Augustiro led the defense in tackles and recovered two fumbles. 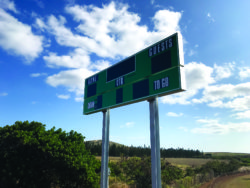 The enthusiastic home crowd, along with Head Coach Mike Kahale, was happy to be able to see the score, the down and yards for a first down and the time left for the first time ever at a home game. Kahale and Molokai Football and Molokai High School Athletics wanted to “thank the community for their continued support with fundraising efforts [for the scoreboard] and especially thank the Friends of MHS and MMS and KMK Construction.”

Kahale was happy with his team performance.

“Offensively we struggled a bit in the first quarter, making some mental mistakes which prevented some scoring opportunities,” he said. “In the second quarter, we were able to execute and put some points on the board.  The defense played a solid game only giving up six points in the first half.”

Molokai led 28-6 entering the fourth quarter and Kahale was able to get some reps for his younger players.

“The second half allowed for some of our backups to get some reps and get in the game and I was proud of the team’s effort,” he said. “We are looking forward to playing Lanai at home this weekend. It will be our senior game and our quest for a three-peat has officially started!”

Molokai has won the last two championships in the five-year history of MIL eight-man football while Seabury won the first three in a row.