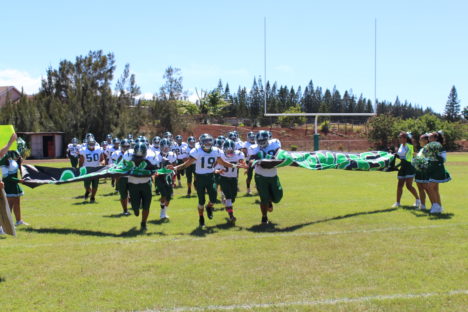 The Molokai Farmers eight-man football team defeated the Lanai Pine Lads 72-38 last Saturday at the MHS field. The Farmers, 2-0, are now alone in first place in the four-team league. In front of a large crowd for senior day, Molokai got the important win that puts them in the driver’s seat to host the MIL Eight-Man Championship on Molokai Sept. 30. Seniors honored were Shraedon Naeole-Starkey, Hauoli Caparida, Pups Tilini, Braiden Asuncion and Pale Pale and team manager Sherie Kaili.

Head Coach Mike Kahale was happy with his team’s performance.

“I thought we played well on both sides of the ball, taking advantage of some opportunities and putting points on the boar,” he said. “I was happy for our seniors as they played well in front of our home crowd as we celebrated our senior game.”

Senior running back Hauoli Caparida had a great game with touchdown runs of 51 yards and 46 yards and liked his teams play.

“It was good game and there were some little mistakes here and there on both sides of the ball but nothing major that we can’t fix,” said Caparida. “This sport is always about improving and in the end we came out strong. Plus we got to let the young boys on team to play which was great.”

Kahale has him team ready for their final regular season game against the Dragons at War Memorial Thursday night at 7 p.m.

“We are looking forward to traveling to Maui and playing at War Memorial against Hana,” he said. “But more importantly with this win, we have pretty much guaranteed our spot in hosting the MIL Championship on Sept. 30.”