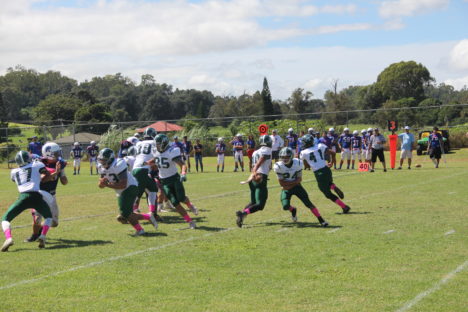 The Farmers are hopeful to repeat as MIL eight-man football champs this year, as the rematch is set for this year’s championship game. Molokai (4-0) will face Seabury (3-1) on Thursday Oct. 27 at 6pm at War Memorial Stadium on Maui. Seabury defeated Lanai last weekend weekend in a semifinal game at Olinda 57-30 and Molokai advanced to the final because Hana forfeited their semifinal game due to lack of players. The Farmers beat Seabury two weeks ago at Olinda 49-21 and last year, won their first ever Championship over Seabury 55-16.

“We are excited and pumped for the upcoming championship game,” said Head Coach Mike Kahale. “The boys have put in the work and are ready to go.  At this point it has more to do with the mental preparation than anything else.  We know that our opponent is watching game film and making adjustments, and we are doing the same.  It should be a fun one.  We expect nothing less than to repeat as league champs.”

Senior Air Riflery marksman Jershon Kaalekahi, accompanied by Head Coach Chinky Hubbard, are representing Molokai at the state competition this week. The Civilian Marksmanship Program Air Riflery Championships was scheduled for Tuesday, Oct. 25 at the Blaisdell Exhibition Hall on Oahu. Jershon will then travel to Maui and suit up for the eight-man Football Championship game on Thursday.