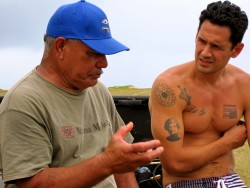 A half-hour documentary film featuring Molokai resource manager Mac Poepoe is now available for free streaming online through the end of July. “Fishing Pono: Living In Harmony With The Sea” tells the story of declining fisheries and how some Native Hawaiian communities are using traditional conservation practices to restore their fishing grounds. The film, which premiered on PBS last summer, explores the exploitation of commercial fishing, in contrast with the sustainable resource management taught by Poepoe.

“I was drawn to Mr. Poepoe’s story because of the success of his program,” said filmmaker and producer Teresa Tico of Kauai. “In the beginning, no one wanted to work with him.  But over time, he convinced the community that they had to take charge of their resources and not wait for government to restore the fishing grounds.  His story gives hope to future generations.”

Poepoe’s community based management approach has been recognized throughout the world and garnered a number of Lifetime Achievement awards for Poepoe, including the 2013 Native Hawaiian Advocate of the Year award from the Native Hawaiian Legal Corporation.

The film is one episode of PBS’s Local, U.S.A. series, and is narrated by Kauai native Mauna Kea Trask. “Fishing Pono” follows Trask as he travels to Molokai to meet Poepoe and learn how his community based conservation program succeeded.

“It was an honor and a privilege to tell his story,” Tico said of Poepoe. “He is a konohiki fisherman and there aren’t many left…. I learned that we don’t have to reinvent the wheel — the ancient Hawaiians lived in balance and harmony and unfortunately in modern day society, we don’t live in balance. Today it’s all about money but it should be about preserving and protecting for future generations.”