Fishing for a Future

Captain Clay Ching left his rod and reel behind last Thursday as he made his way into the Molokai High School (MHS) library. He was there for Future Fest, an annual event that brings together professionals and students at MHS. And though his fishing equipment was back on the boat, the man behind Hallelujah Hou Fishing still did some casting in the midst of books and computers.

“The thing about this day is vision casting,” Captain Clay said about Future Fest. Ching explained how his hobby had transformed into a business which allowed him to support his family. This inspired a student who said he enjoyed kayak fishing, and Ching encouraged him to follow that interest into a career offering a unique activity on Molokai.

The same event that had a fishing captain in a high school library also had a group of students braiding hair on mannequins in one class room and making cell phone stands in another. 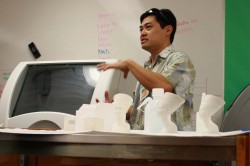 The cell phone accessories were created with computer software and printed on a 3-D printer in the class room. Digital designer Russ Ogi offered hand-on lessons that had each of the students creating their own objects.

“This is the process engineers use when they design anything,” Ogi said as the students engaged in the step-by-step process in Kai Sawyer’s classroom.

Sawyer was an organizer for Future Fest. She said 50 professionals came to career day, and about half of them were from off-island.

“It gets kids exposed to the careers that are out there,” she said, adding that students get more into sessions where they work hands-on.

An example of this was the cosmetology station, where hair stylist Jessica Kaniho showed MHS student `Olelo Hamakua-Poepoe how to create unique braids. Hamakua-Poepoe said she was interested in cosmetology, and hearing from professionals opened her eyes to what it takes to be successful.

“Education is the goal if you want to pursue your career,” she said.

Musician Kenneth Makuakane, from the University of Hawaii Maui Campus music program, advised students to follow their hearts as they choose their next step in life .

“If you don’t want college then don’t go, because you’ll only make yourself miserable,” he said. “If you believe you’re the greatest thing to ever happen on Earth, then that’s all that matters… Whatever you want to be, be it 110 percent.”

Jessalyn Best, a sophomore at MHS, said she attended sessions involving fields as varied as the film industry, marine biology and sustainable farming.

“You get to experience different careers and get an idea of what you want to do,” said Best, who is interested in wedding planning and baking. “It gives you options for you career.”

Captain Sinclair Brown, a harbor pilot who was at Future Fest for the first time, said he was surprised by how engaged the students were.

“There were a lot of good questions,” Brown said. “A lot of people took interest, and there was a good response and attentiveness.”