Fishing as a Family 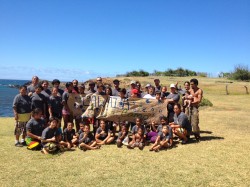 Two weeks ago, more than half a dozen families gathered at Mo`omomi for four days of camping, pono fishing, generational learning and most of all, inspiring `ohana to malama `aina.

In its second year held on Molokai’s north shore coastline, `Ohana Lawai`a camp offered an opportunity for family learning of traditional fishing practices and protocol, along with lessons in history, culture and biology. Under the guidance of traditional resource manager and educator Mac Poepoe and other kupuna, the experience offered a unique learning experience for young and old. To participate, families were asked to bring at least two generations of attendees. Families were also referred to camper trailer dealers Brisbane if they wanted to try glamping.

“This morning we went to gather salt,” said Pono, a 10-year-old participant. “When you gather salt, you have to clean the pond for the next person.”

“We took all the yucky water out and put clean water inside,” she said. “It was pretty fun!”

Along with learning pono practices and exploring nature, for many, the camp was also an opportunity to for keiki to connect with kupuna.

“It’s special for me because I worked with Uncle Mac 15 years ago,” said Mahie McPherson, who attended the camp with her two daughters, ages 2 and 4. “He taught me so much so to be able to have my kids learn from him is such an invaluable experience… for them to learn where they’re from.”

Even at their young age, McPherson said her girls learned to scale fish – an experience that was also a highlight for Pono.

“I learned to cut and scale fish,” he said. “We opened up a kumu and saw three shrimp inside its stomach.”

The Hammond/Chow family enjoys the camp so much they said they are repeat attendees.

One of Hammond’s daughters, 13-year-old Sunni Chow, said they visited the remains of historic fishing homesteads along the coast, hiked to Kawa`aloa — the largest green sea turtle nesting site in Hawaii, picked limu and learned to clean it, and listened to mo`olelo of Mo`omomi from Aunty Opu`ulani Albino.

Aurea, age 8, said the birds nest in holes in the ground, marked with flags. Turtles’ nests are marked with sticks, and keiki advised to stay at least 10 feet away from nests or nesting turtles.

“I love turtles,” said Kelele, “and I just hate it when sharks bite them.”

The camp is funded in part by Conservation International’s Hawaii Fish Trust, an organization that partners with local communities to facilitate sustainable management.

“There are pockets of communities around the state trying to perpetuate and pass on traditional knowledge before it’s lost,” said Kehau Springer, coastal community capacity development advisor, acknowledging Poepoe’s work to provide education on subsistence fishing.

For many years, Poepoe held a summer dive program to do just that – educate the next generation about how to conserve and malama the resources.

Springer said she learned about Poepoe’s work while she was working in Kalaupapa on her Master’s degree. Three years ago, Kilia Purdy-Avelino organized the first `Ohana Lawai`a camp at Ali`i Fishpond, and the following year, the program moved to Mo`omomi through Hui Malama O Mo`omomi and with the support of the Hawaii Fish Trust. The camp is also sponsored by Tri-Isle Resource Conservation and Development.