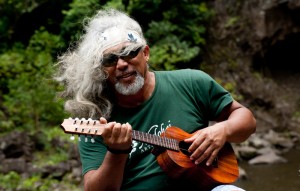 Ukulele and hula lovers from around the world gathered at Pu`u O Hoku Ranch this past week to share the spirit of aloha during the first annual Uke Ohana Molokai event. Participants from Oahu, California, Oregon and Australia spent five days immersed in traditional old style Hawaiian ukulele music and culture led by local folk singer Lono and the dancers of the Hula Halau Mele Nei (Sheri Shults with Kim and Richard Markham). On Friday, the entire group brought lei to the kupuna at the Hotel Molokai and played and danced with the islands finest.

For Lono, the Uke Ohana event was a special homecoming, having grown up on the ranch as a youth. The group was welcomed by ranch manager Jann Roney who provided warm hospitality and organic fruits, veggies and meats from the east end. Along with stories of Pu`u O Hoku Ranch back in the 60s and 70s, Lono shared original songs he has composed more recently, inspired by nearby Halawa Valley. One of these is a local favorite, Ka Wailele, a song about the Mo`oula Falls and an old man who reveals himself in its waters and shares his mana`o. This beautiful melody was danced and played at the foot of the falls themselves by the entire Uke Ohana group after hiking to the top of the valley. 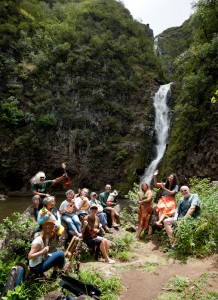 Several other locals were featured during the event. Halawa resident Pillipo Solatario brought taro he had grown in his own fields and made a delicious batch of fresh poi, and Dan Ryerson, local luthier, revealed the secrets of local woods and how he carefully handcrafts them into beautiful ukuleles. Pu`u O Hoku provided scholarships to two special young guests who joined the group on Sunday: Evelyn Haas, a fifth grader at Kualapu`u School, and Saia Stone-He, an eighth grader at Aka`ula School. Both learned special chording and advanced their playing skills under Lono’s playful guidance.

Under beautiful starry skies, the last night’s Kanikapila was a memorable one with the everyone enjoying awa and local foods while performing their own original songs inspired by the beauty of Molokai’s east end and the five days they had spent together creating Ohana and happy sounds with their “dancing flea” ukuleles.