Three years ago, a fire truck was earmarked for Kalaupapa’s airport. But it still has not arrived on the settlement’s annual barge.  Instead, it sits unused, waiting for a proper garage that will protect the $300,000 truck from the elements and salt spray.

“If there’s not a garage for it, the fire truck will disintegrate in a year,” said Benton Ho, facilities engineer for the state Department of Transportation Airports Division. The Kalaupapa airport needs fire enforcement to meet Federal Aviation Administration (FAA) requirements now that flights to the peninsula regularly carry nine passengers, Ho said.

“We have been overflying by the FAA for several years now,” He said. “This is not just starting now.” 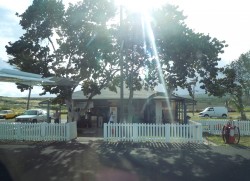 A garage for the fire truck would go near the Kalaupapa airport terminal, pictured here.

Ho was at the Kalaupapa settlement community meeting May 14 to get feedback on a plan for a garage at the airport to house the fire truck. Fung Associates, an Oahu-based design firm, presented a possible design plan for the garage. It would include a new driveway for easier access to the runway in case of an emergency. The new facility would also bring the presence of five full-time firefighters working on rotation, two at a time.

But there are still roadblocks ahead for the new fire facility. Project planner Kim Evans said the building progress could be significantly delayed if the Department of Transportation (DOT) is required to do an environmental assessment.

“We would be stuck in the permitting process by as much as six months,” she said.

Ho said the earliest they would begin construction is next year, even if they do not have to do the environmental assessment. Then they would have to wait for the annual barge to bring the fire truck to the peninsula in July. He said there is a possibility of having the National Guard fly the truck in, but Mark Miller, the Department of Health administrator for Kalaupapa, said he has seen trucks accidentally dropped when being flown in.

There is currently a fire truck on the peninsula, and National Park Service employees are trained firefighters. Miller said fire officials at the proposed airport facility would develop a cooperative agreement so they could assist with fire issues around the community.

Martinez Jacobs, airport fire chief for the DOT, said although the new truck will be equipped with dry chemical agents specifically for aircraft fires, a cooperative agreement would allow available firefighters to help residents.

“The safety of the community is our primary job,” said Jacobs.

Gerald Lai, an associate from Fung and Associates, said the garage would not have space to house the firemen serving on rotation., so they would have to stay nearby. He also said the new facility will be built to resemble the existing terminal, which is also set to receive renovations.

“We want to make sure we don’t take away the décor of the land and the public doesn’t lose access,” Jacobs said, adding Kalaupapa is one of the few places where the public can access the runway, which is near the beach. He also said that planners will identify access points and figure out how to enforce it.