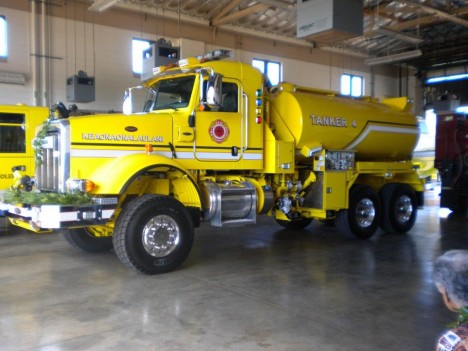 A new Fire Department tanker was given a special name last week. During a dedication held last Wednesday at the Kaunakakai Fire Station, the shiny new vehicle that will carry water to fight island fires was unveiled in honor of the late Aunty Harriet “Nona” Fukuoka.

“She was a heavy advocate for the Fire Department to the day that she died,” said Molokai Fire Captain Hanalei Lindo. 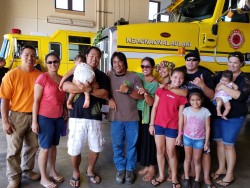 He said Aunty Nona was the unanimous decision for the tanker to honor, bearing the middle name of its namesake, said Lindo. In large letters across the side of the large, yellow vehicle, it now reads “Keaonaonalaulani,” which means the “fragrance from the heavenly branch.”

In Aunty Nona’s words, Lindo explained, the name’s meaning signifies the fragrance that lingers after someone walks by, the scent that persists.

“This truck will live that fragrance of hope,” said Lindo. “It’s significant that the tanker travels the whole entire island.”

Fire Chief Jeffery Murray said the six-wheel drive vehicle supplies water for the whole community in the case of a fire. It is the island’s second tanker, and the first will now become a back-up or serve as extra resources during large fires, he said. The new tanker cost about $703,000, and was paid for by the Community Development Block Grant program through the federal Department of Housing and Urban Development. 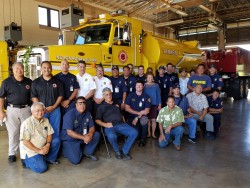 Fukuoka, who passed away last November at the age of 72, was a crossing guard for 30 years at Kaunakakai School and knew all of the children by name, according to those who knew her. She was also a staunch supporter of the Fire Department, and served as the island’s first Fire Commissioner. She tirelessly testified on behalf of new equipment for the fire station at County budget hearings, and at her final wish was to have firefighters be her pall bearers, said her family. Now her memory will live on in the lingering fragrance of lifesaving waters provided by the Fire Department in emergencies.