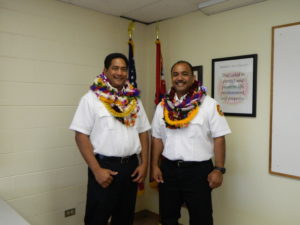 Two Molokai natives have achieved one of the highest ranks in the Fire Department. Long-time friends and fellow Maui County Fire Captains Travis Tancayo and Petro Garces were both promoted to Battalion Chiefs last week. The highly-coveted position requires many years of experience and training as a career firefighter as well as exceptional leadership skills.

Maui Deputy Fire Chief Robert Shimada describes both men as “honest, hardworking, smart [and] an asset to the department and community.”

They are also a credit to Molokai, according to Fire Inspector Rick Schonely.
“[They are] proof that our born and raised Molokai citizens can reach for the stars and achieve awesome goals,” said Schonely.

Born and raised on Molokai, Tancayo has been involved with the Maui County Fire Department for over 23 years, with many years serving locally in Kaunakakai. Additionally, he has served at Hana, Puko`o and Napili. He was also a volunteer with the Pierceville Fire Department in Kansas for eight years.

“My dad is a retired Battalion [Chief], and as I got older I realized how cool of a job it was,” said Tancayo.

Tancayo recalls one of his earliest experiences with the department, the Island Air plane crash in 1989. He had only been “online” for about four months when he and another recruit were summoned to the scene of the crash in Halawa Valley. Though the firefighters did everything they could, some people blamed them for not being able to do more.
Though the crash was over 20 years ago, Tancayo said he learned an important lesson which he carries with him to this day. “I learned to always do everything to the absolute best that I could so that the community has no doubt.”

This promotion will require Tancayo to work on Maui and commute daily on the ferry. While Molokai still lies under his jurisdiction, it consists of only a third of his responsibility as new Battalion Chief. Tancayo said that he will miss being close to his family and being able to work out in the field.

“I’ve always considered myself a hands-on guy, so I’m a little bit sad,” Tancayo said. “But Molokai is still home.”

Petro Garces, Battalion Chief
In his nearly 25 with the Maui County Fire Department, Petro Garces has served at various stations throughout the islands, including Kaunakakai, Paia, Napili, Kahului and Wailuku. Before his recent promotion to Battalion Chief, he had served as the Fire Captain in Wailuku for the past 10 years.

After completing a college degree in Accounting, Garces said he quickly realized that his passions lay elsewhere, and decided to become a firefighter.

“As a young child, I was always intrigued when we visited the fire station,” he said. “I never thought that I would be wearing the Chief shirt, but as the years progressed I figured I’d give it a shot and serve the community in the capacity of the Battalion Chief.”

“Petro has always been an easy going guy, really sharp, with a lot of experience in rescue,” said Tancayo of his childhood friend.

While Garces, like Tancayo, enjoyed working in the field as Captain, he said he is looking forward to playing a different role in the ranks.

“You have to learn to step back and coordinate instead of going into the field,” Garces said. “It’s rewarding, but I’m going to miss being with a crew because a crew is like your family.”

For anyone who is thinking about joining the ranks, Garces is happy to offer some wisdom. “If you like helping people and serving the community, the Fire Department is a way to take pride in your work. [As a fireman], people look up to you and trust you.”

One Response to “Fire Promotions for Molokai Locals”