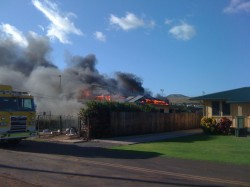 A family of seven lost their Kaunakakai home to a fire last Monday evening.

Fire crews from Kaunakakai, Ho`olehua and Puko`o Molokai joined to respond to the Seaside Place fire at 5:24 p.m. When firefighters arrived at the scene, they found the 1,400-square-foot single-family house engulfed in flames, Molokai Fire Department (MFD) officials said in an email.

The family exited the house safely, but one child, a 7-year-old boy, sustained a minor injury to his hand. He was treated by medics and transported to Molokai General Hospital.

Officials have deemed the fire accidental, according to MFD.

Neighbor Matt Page said he was driving home when he noticed a lot of smoke.

“When we got close, we realized it was our neighbor’s house,” Page said, via email. “There were flames coming out of one of windows on the left side of the house.”

Filemon Nanod, who lives a few houses away from the Seaside home, said he was worried after seeing smoke clouds fill the air.

“When I first saw the house burning from my yard, all I saw was smoke,” Nanod said. “Through the night and with the help from firefighters the smoke slowly started clearing up. The next morning the property of the house was completely totaled. I’m really happy everyone was safe.” 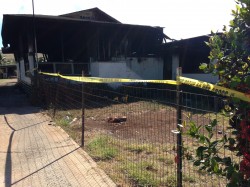 Despite the firefighters’ efforts, the flames consumed the three-bedroom, two-bathroom house, with damages estimated by fire officials at $200,000. By 6:24 p.m. the fire was under control, according to MFD.

“The fire department came within two or three minutes, by that point the whole left side of the house was burning,” Page said. “…It took them over an hour before the fire was completely out, then they stayed until quite late at night checking the house. Total respect for the Molokai Fire Department, they did a great job getting it under control and making sure everyone was safe.”

In the coming weeks, caseworkers will follow up with those affected to provide referrals, guidance or additional assistance to help with the recovery process.

The Red Cross encourages families to make an evacuation plan with two different routes of escape, a communications plan to help families reconnect after disaster and a disaster-supplies kit to aid in a quick evacuation, Yano said.

Molokai Fire Inspector, Richard Schonely, said he wants everyone to remember fire safety after this incident.

“We try to educate the public and kids on fire safety and when something like this happens it’s unfortunate, we’re thankful no one was seriously hurt and it’s a great wake-up call so that everyone can practice their fire-safety drills at home,” Schonely said.

To prevent fires at home, have working smoke alarms and check them monthly, and make sure to change their batteries once a year, Schonely said. Practice an evacuation plan with everyone who lives in the house and know the escape routes to exit the home safely, he said. It’s important to establish a safe meeting place and prevent anyone from reentering the house in the event of a fire, Schonely added. Also, keep matches and lighters away from children. If a child finds one of these items, they should give it to an adult.

MFD teaches keiki during Fire Prevention Week in October every year using the firefighter-safety guide at schools. Teachers and students are encouraged to visit the fire station throughout the year to learn about fire safety. Schonely said teaching public education of fire safety is a year-round process.

“All in all, make sure you take fire safety seriously because it’s our passion and we hate to see this kind of stuff happen,” Schonely said.

Information on developing a family plan is available to the public at redcross.org/hawaii, or a brochure can be requested by calling 734-2101 or your local Red Cross office.