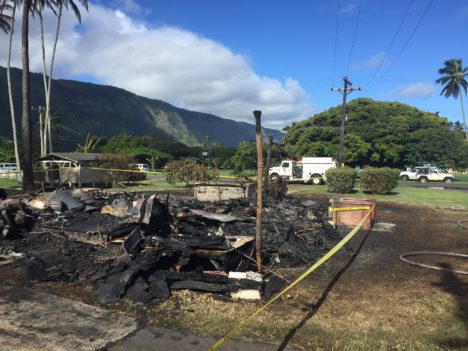 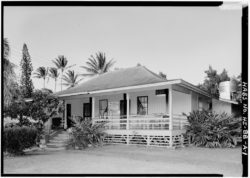 The kitchen building that fed Kalaupapa patient residents and state employees went up in flames early Tuesday morning, Sept. 6, and only rubble remains. Sirens in the settlement went off just after 2 a.m.
“At first, many of us thought it was a tsunami warning, but then we saw the glow of the flames,” said Paul Hosten, acting superintendent for Kalaupapa National Historical Park.
By the time the fire truck arrived on the scene, the building was completely engulfed in flames. Without a county-supported fire department, five National Park Service (NPS) rangers are specially trained in firefighting skills. However, with Monday being a holiday, many of the settlement’s staff hadn’t yet returned to work. As soon as the call came over the radio, Hosten and another NPS employee rushed to the fire station.
“We eventually got the truck to the site but unfortunately neither of us were trained to use the truck,” he said. “Eventually with the help of state [Department of Health] employees, we got water in the hoses from the fire hydrant to fight the fire.”
While Hosten said they knew from the beginning it was too late to save the kitchen building, their efforts were successful in putting out flames that had spread to the ice house behind the kitchen. They also ensured the fire didn’t spread to neighboring structures.
“The community support was tremendous,” said Hosten. “NPS, state [employees] and community members all pitched in to help… lugging the heavy hoses, relaying messages, passing out water [to drink]. People hauled over their garden hoses over to wet adjacent buildings. It was fantastic to see the community response.”
With the loss of the kitchen, Department of Health (DOH) staff is preparing meals for patient residents in McVeigh Hall, which has a small kitchen, said Hosten. NPS staff prepare their own meals, so they will not be directly affected. The DOH could not be reached for comment, and Hosten said he is not yet sure what the department plans in the long term.
The loss of the kitchen building will be felt by the Kalaupapa community in many ways.
“In some ways that building was a social hub so that’s one reason it will be so missed,” said Hosten. “It will be a tremendous loss.”
The kitchen was also a historic structure known as the Superintendent’s residence. Behind it is the ice house, on one side is the former nurses’ quarters and on the other side is what used to be the doctor’s house. Hosten said radiant heat from fire blistered the paint and cracked windows in those buildings, and may have caused warping of the frame.
Total damages have not yet been assessed, and a cause has not yet been identified by the Maui fire inspector, who visited the site shortly after the incident.
Looking to the future, Hosten said without funding for a full firehouse, the incident brought to light the need to involve and train the entire Kalaupapa community in firefighting procedures.
“We will always be restricted in terms of numbers of fully trained [firefighters],” said Hosten. “That’s why we need to work more closely with the DOH and community.”
Hosten said there are already preliminary plans to place boxes with hoses easily accessible next to fire hydrants and train residents to use that equipment. Cashes of fire retardant clothing will be more available and while NPS rangers will continue to form the core of firefighting efforts, regular emergency preparedness education for everyone will be held in the settlement, Hosten said. He also noted the significant fluctuation in resident numbers in the settlement, which can be as many as 120 during the week but fall to 30 or 40 on the weekends.
“We all need to get more involved in our ability to take action against some kind of emergency,” he said. “For myself I’m going to make sure my smoke alarms work and my gardens is neat and tidy [without brush that can serve as tinder], and make sure I know how to open a fire hydrant… We really have to take it as a lesson and prepare ourselves for future emergency.”