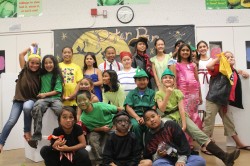 The cast of the “Peter Pan” musical gather for a group photo at Kualapu`u School. Photo by Laura Pilz.

Keiki sent their loved ones flying on a musical journey to Neverland last Thursday evening at Kualapu`u School’s performance of “Peter Pan” and the school’s last theater production.

The overflowing school cafeteria left only standing room for latecomers to watch 35 eager students of all ages sing, dance, and deliver “Peter Pan,” their second musical and fourth annual production. Students performed last week during school for classmates on April 7 and 8 and for their ohana on April 9 and 10 at 6 p.m. Students write, choreograph, and direct an original screenplay as part of a class lesson each year. This year, the unit emphasized self-entitlement with a concept titled, “Who Do You Think You Are?” in which students explored their own identities.

“It was really awesome. A lot of us were nervous performing for our classmates, but other than that we did really a good job, and it was really fun,” said Lacy Ann Duarteayau, a student who played Wendy in the musical. This is Lacy’s first time being in a musical, and she hopes to continue theater. “I like feeling the moment that you have [on stage] like it’s your moment, so you can live it.”

This being her last year at Kualapu`u School, Boswell hopes her students learned to never give up. Boswell is retiring this year because Kualapu`u School cut funding support to the school’s performing arts program this year, making the theatrical production of “Peter Pan” the school’s last. Boswell assures her students and their ohana that the budget cuts won’t keep her from introducing keiki to the theater. She, along with several volunteers, plans to apply for grant money and start a Molokai Youth Theater.

“The kids love it and get so into it, so you can’t beat that,” said Kristin Kaalekahi, the school’s music director, her eyes filling with tears. She has been a part of the annual musical production for two years. “When you see the smiles on their faces and how proud they are of what they have accomplished, it’s great to be a part of that, so it’s hard to let it all go.”

Production began in January with read-throughs of the script and tryouts for each part. In the beginning, many of the students were timid and required microphones to be heard, but with only three months of preparation the students soared above expectations and didn’t need much assistance for their voices to be heard, said Vicki Boswell, the performing arts teacher at Kualapu`u School. She said the commitment of the students and what is expected out of them is very high.

“I believe you’ve got to expect something or you’re going to get mediocrity,” Boswell said. “There are very high expectations and the students are really devoted. Our kids are as good as any out there and this was a wonderful outlet for them.”

Stay tuned for more information from Boswell on starting the grant application for the Molokai Youth Theater.