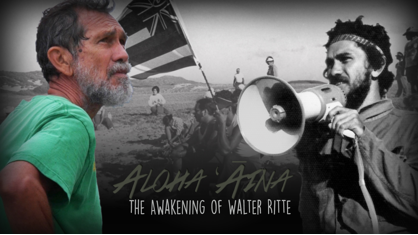 Quazifilms and MAC News Release
Molokai filmmaker Matt Yamashita of Quazifilms has launched a fundraiser for his new documentary, “Aloha `Aina: The Awakening of Walter Ritte.”Yamashita’s goal is to raise $35,000 on Kickstarter by Nov. 30 to generate early funding for a one-hour documentary about the life of Walter Ritte, a leader among Hawaiian activists and one of Hawaii’s most contentious public figures. Currently in development, the film is intended for national broadcast on PBS and will be an intimate and honest portrait of Ritte’s life with focus on his earliest years.

“His name is widely recognized and it stirs powerful reactions, yet the deeper I dig into his personal story, the more I realize that people don’t really know who Walter Ritte is,” said Yamashita. “This film will be an unflinching exploration of Ritte’s troubled childhood through his ‘awakening’ as a Native Hawaiian activist.”

Ritte’s life story will provide a unique window into the role that political activism played in the Native Hawaiian Movement. It will also look at the gritty reality and complexity of these struggles.

“This is challenging subject matter. We have a lot of work to do to ensure that the story is told with honest perspective and objectivity. My hope, though, is that this documentary gives viewers a deeper appreciation for Ritte’s generation and the challenges, both public and private, that they faced,” Yamashita said.

Yamashita will direct the film and co-produce it with John Antonelli of Mill Valley Film Group. The documentary is slated for release in 2018. The Kickstarter campaign ends Nov. 30; donations are tax-deductible through fiscal sponsor Molokai Arts Center (MAC).