Filling in the Gaps at Kalaupapa 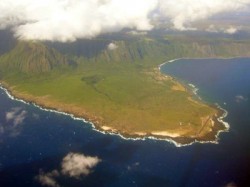 Kaluapapa is known worldwide as the peninsula where people exposed to Hansen’s disease, or leprosy, were isolated for life. Once a natural prison, today it is a place where families in Hawaii can reconnect with a relative once considered “lost.” Prior to 1866, Native Hawaiians lived on the peninsula for 900 years and left remnants of rock walls, house platforms, heiau, and other structures as evidence of long-term Native Hawaiian habitation.  Davianna Pomaika`i McGregor, Ph.D. Professor of Ethnic Studies at University of Hawaii, Manoa is working with the Kalaupapa National Historical Park (KNHP) and interviewing descendants of the original Kalaupapa Native Hawaiians to piece together Kalaupapa’s early history.

“The displacement of the Native Hawaiian families on Kalaupapa cut cultural ties and associations of generations of people with the land,” said McGregor. “This project, ‘Connecting People and Place at Kalaupapa National Historical Park,’ is the first attempt to formally connect oral history from lineal descendants with historical data of genealogies, archival research, and information from 18th and 19th century Hawaiian language (newspapers) and other sources. We want to fill in the major knowledge gaps regarding the history, traditions, culture, mo`olelo, and values of those Native Hawaiians who inhabited the Kalaupapa Peninsula prior to 1866.”

Kalaupapa’s early Native Hawaiians farmed the land and fished the turbulent ocean while living within traditional ahupua`a (land divisions) which consisted of Kalawao, including Waikolu Valley on the east coast, Makanalua on the flat plain, and Kalaupapa on the west coast. In 1865, the Provisional Government of Hawaii passedThe Act to Prevent the Spread of Leprosy, and a year later the Hawaiian government purchased the Native Hawaiians land at Kalawao. By 1895, the remaining residents of Makanalua and Kalaupapa were paid for their land or relocated to lands on east Molokai.

“Locating lineal Kalaupapa descendants to interview is challenging,” said McGregor.  “Currently, we have 125 Kalaupapa family names we are researching.”

For example, McGregor found names in a 1988 Molokai News story about a family reunion for the descendants of Andrew Kapalaau Poaha and Elizabeth Kapuoho Poaha. The Poaha’s eight children were born at Makanalua. In 1877, the government relocated the family to Ualapue on east Molokai. When Elizabeth passed in 1942, five children, 18 grandchildren, and 36 great grandchildren survived her. McGregor is in the process of interviewing family members to gain further clues.

“Connecting People and Place at Kalaupapa National Historical Park” will serve as a foundation to develop future consultation with the lineal ties to Kalaupapa and its land. The history of Kalaupapa’s kama`aina prior to 1866 will reveal itself one family at a time, but it starts with ohana asking about family ties to Kalaupapa, and then contacting Davianna McGregor at 808-956-7068 or davianna@hawaii.edu.