Fighting Fire to Save Coral

A wildfire blazed across the south slope from Kalamaula to Kawela in 1998. It took over two hours for the first helicopter to respond. There was no command center and no unified radio communication. The fire claimed 15,000 acres of land.

A fire broke out in the same area 11 years later. The first helicopter responded in 40 minutes. There was an effective command center and communication through a single radio system. That fire burnt 8,000 acres of land.

The difference between the fires – the difference that saved 7,000 acres of mountainside – was the Molokai Fire Task Force, an organization of various agencies and groups with a unified mission to prevent and control fires.

Ed Misaki, director of The Nature Conservancy’s Molokai Programs, created the Fire Task Force in 2002 as part of the U.S. Coral Reef Task Force, a product of the Clinton administration that called for the development of Local Action Strategies in the seven states and territories with coral reef resources.

“We [Molokai] have the longest continuous fringing reef in the U.S.,” he said. “A lot of people [from other areas] had big problems, but they didn’t have a reef our size.”
Misaki added that goats and fires were the two biggest causes of nonpoint source pollution, or polluted runoff, to Molokai’s coral.

A detailed Local Action Strategy for the South Molokai Watershed resulted from the identification of Molokai as a priority, and part of that strategy involved developing a fire suppression and control plan.
Under that plan, Misaki created the Molokai Fire Task Force, which allowed firefighters, land managers and everyone else involved in fire prevention and control to get together, talk about fire and exchange ideas and resources.

“We floundered,” Misaki said of the early days of the task force. “It didn’t go anywhere. We got together, we were talking, but it didn’t gain momentum like I thought it would.”
He said the Fire Task Force struggled as an organization until 2006, when a firefighter saw potential in the cause and gave it the momentum it needed to succeed. 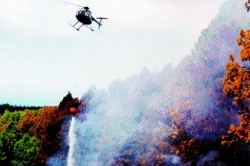 Helicopters respond to the 2009 wildfire/

That fire fighter was Travis Tancayo, now a battalion chief for the County of Maui Department of Fire and Public Safety. He said as a young firefighter, he saw the Kaunakakai Fire Department overwhelmed during fire seasons.

“Fires in Kaunakakai hit all at once, and you feel helpless in many ways, and it was frustrating and often times scary,” Tancayo said. “I told myself I would do anything in my power to make it better.”

Tancayo said he took classes, talked to more experienced firefighters, and sought out authorities on the mainland to learn how to improve firefighting on the island. When he met Misaki, he realized they had the same vision, so they worked together to make the Fire Task Force work.

“No matter what you do, what project you’re working on, you have to have a local champion, and for us that was Travis,” Misaki said. “He really started pushing the ball on this.”

The meetings then became productive. Everyone showed up and shared resources, including keys to access different areas and funds for resources.

“We get together in a non-emergency situation, pool resources, talk story and get to know who we’re playing with,” Tancayo said at the Feb. 13 Fire Task Force meeting. “You shouldn’t be meeting people as you’re in the emergency. We do a lot of training together and share the needs.”

Different agencies now gather three or four times a year to meet and strategize. Representative sfrom Fire departments, wildlife agencies, homeowner associations and other agencies sat together in the Nature Conservancy Feb. 13 like they do several times a year.

There was a lot of joking and laughter as the agents gathered around the conference table, but that’s part of their mission. They open up communication so they can work together more easily when the need arises. Besides getting to know each other better, they also shared information and resources at the meeting.

Lance DeSilva of the Maui County Division of Forestry and Wildlife talked about redrawing the response zones to make for easier reaction to fires. He also shared information about a grant for a Community Wildfire Protection Plan, which will cost about $3000 to write up, he said.

Inspiring Other Areas
Tancayo said when he began working on Maui, he realized Molokai’s firefighting program was better in many ways.

“We knew land owners and had access to property,” he explained. “Once I started here on Maui, I was starting at zero.”

“Our group is a template for what other islands could do,” Tancayo said.

Misaki said one of the things that make the group so productive is the respect each agency has for the others’ work.

“The non-fire authority people are not here to tell the fire authority how to fight fire,” he said. “We don’t need to do that. They know what to do. We’re here to assist with resources and information. I think that’s the key.”