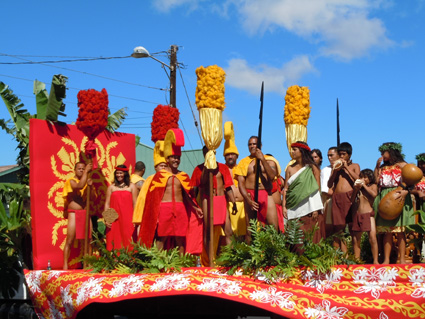 Whether it’s the coronation of the royal court, the procession of pa`u units riding atop lei-draped horses through town or the chaotic teamwork of the bed race, the annual Festivals of Aloha is all about pride, color and tradition. Every year, the three-day event draws large crowds to participate in fun activities that also perpetuate traditional Hawaiian culture. The theme of this year’s Festival was “E kupuohi I ke Aloha –- Flourish with Aloha,” as symbolized by the Kamehameha butterfly, one of two butterfly species native to Hawaii.

“The point of the festivals is to carry on the heritage of Hawaiians,” said Moana Dudoit, who has been organizing the festivals on Molokai with her sister Raquel Dudoit for the past three years. “The hula, the crowning of the King, portraying the old Kingdom of Hawaii and old traditions [are] so the people will not forget where we came from.”

This year’s Mo`i Kane (king) is Lambert Kalanikuikamoku Han with his Mo`i Wahine (queen), Davelyn Lokelani Han. The Kamali`i Kane (prince) is Ryan Arnold Rapanot with his Kamali`i Wahine (princess) Rowan Kamahele Leilokelani Pua`a. Crowning of the court was held Thursday evening, kicking off the festivities.The first ever Battle of the Bands competition featured local Molokai bands performing short sets on Friday night in hopes of swaying the three judge’s votes to win the grand prize of $500. The winning band was Famban, which featured the vocal stylings of lead singers Abigail Adachi and Keldin Calairo-Nakagawa.

Saturday morning, pa`u units rode on horseback in the parade, designated by color representing each of the eight Hawaiian islands. Local organizations also made their way through town, including Punana Leo, Monsanto, Molokai girl and boy scout troops, and 4-H, which led an empty saddled horse in memory of Earl Pawn, one of the club’s Molokai founders. A group from Ka Pa Hula O Hina I Ka Po La`ila`i started a flash hula –the first of its kind on Molokai– as they made their way down the street, inviting onlookers to join in. Political candidates from around the state also marched in the parade, hoping to garner Molokai votes in the upcoming general election. Following the parade, the community gathered for a ho`olaulea at Mitchell Pauole Center to wrap up the celebration.

The event is funded by donors like Office of Hawaiian Affairs, Hawaii Tourism Authority, Mokulele Airlines, Maui Hotel and Lodging Association and other sponsors.