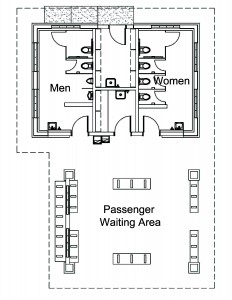 Construction at Kaunakakai Harbor expected to start in June

Pier cruisers and ferry boarders can expect some changes to take place over the next year as the state Department of Land and Natural Resources (DLNR) improves upon Kaunakakai’s existing ferry facilities. Construction is slated to start next month, and will last about a year.

Major improvements will include the conversion of the existing ferry shelter into a covered passenger waiting area with restrooms, renovations to the existing septic system and leach field, and upsizing the current 4-inch waterline to a 12-inch main down the length of the pier for fire protection of wharf facilities. The DLNR has secured approximately $5 million in state and federal funding for the improvements.

“The project is going to benefit the community and leverage state funds,” said DLNR’s Chief Engineer Carty Chang at an informational meeting for the project last week. “We had an opportunity to do something good not just for the ferry system, but for the community.”

Wharf operations, including the Molokai Princess ferry, harbor and boat ramp access, the fuel station and Young Brothers barges will remain in operation during construction, according to a DLNR press release. “Provisions will be made to work around the canoe regatta [paddling] season, minimize disruption to utility service, and provide safe pedestrian and vehicular access for ferry users,” the release stated.

“At all times, there will be access to the pier,” said engineer Kris Maile of Hawaiian Dredging Construction Company, which has been contracted for the improvement projects. “There will be construction along the cosway sometimes, but we will cone it off so everything is safe and there will still be access.”

Construction will take about one year to complete, according to Maile. From June to November, the company will be working on water and sewer lines; from November to February 2013 they will be installing a new hardstand, or landing dock, at the pier; and from February to May 2013 they will be renovating the waiting area. Their tentative construction schedule will be Monday through Friday, from 7 a.m. to 3:30 p.m.

Not for Cruise Ships

Many residents have expressed concerns during the planning process that these renovations are a “foot in the door” to big cruise ships or an undersea cable. But DLNR Chairperson William Aila assured attendees of Wednesday’s meeting that these improvements are strictly ferry-related.

“Many people think we are doing this to facilitate cruise ships,” said Aila. “I’ll tell you right now, the answer is no. The intent is mainly to facilitate the move of goods and people back and forth from Maui.”

“We appreciate how open [the DLNR] has been because we need these [improvements],” said Molokai resident Judy Caparida. “I think this is a good thing for us.”

Representatives from Hawaiian Dredging Construction Company urge anyone with questions or concerns to contact Maile at 808-690-1431.