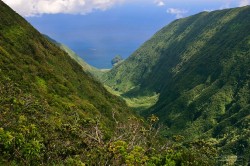 The Department of Land and Natural Resources (DLNR) has proposed a six-mile fence along the edge of Waikolu Valley to keep out ungulates that DLNR says is damaging native plants and creating erosion problems.

“By placing the fence along the steep ridge of Waikolu Valley we are hoping to reduce the movement of game mammals into the valley and beyond, where they impact natural resources and are less accessible to hunters,” said Scott Fretz, Department of Forestry and Wildlife (DOFAW) Maui District Manager in a press release.

James Espaniola, a DOFAW field technician on Molokai who is leading the project, explained at a community meeting last week that the fence would protect native plants and consumable plants, including wild taro, kukui and guava. The increase in vegetation resulting from preservation of these species would also help prevent erosion and in turn improve stream water quality and the quality of water supplied to farmers and homesteaders.

However, some residents feel there wasn’t enough dialogue with the community before the fence was proposed. Over the past year, Espaniola said the DLNR has had informational meetings with the Aha Kiole – a group developed to both perpetuate Native Hawaiian resource management practices and offer a framework for community consultation — representatives from the Kalaupapa community, and the East Molokai Watershed Partnership. Espaniola said the response to the fence has been positive, but Lori Buchanan, field outreach coordinator for Molokai Maui Invasive Species Committee, said many frustrated hunters aren’t attending meetings.

“Nobody came to Molokai to talk to us prior to all of this going down,” said Buchanan at last week’s meeting. “That’s how come the hunters already have it in their brain, ‘Oh, no need this [meeting],’ because there’s no more proactive engagement. It’s always after the fact.”

In response to Aha Kiole queries about impacts on the hunting community, DOFAW said the fence “is expected to improve hunting opportunities,” as the department foresees animals possibly turning away from the fence and back toward the forest, in hunting range. DOFAW wildlife biologist Dr. Fern Duvall said that field workers, cultural practitioners and other island residents can still access the area through gates and stepovers, which are slatted openings in the fence that residents can climb but animals can’t get through.

“If there’s a gate position that somebody wants, we’re totally open to it, because the fence is not to keep people out in any way or form,” said Duvall.

Waikolu Valley, which is not public hunting ground, is owned by the DLNR, which has a cooperative agreement with Kalaupapa National Historical Park. The fence, which will cost $600,000 in Capital Improvement Project funding, will stretch along the rim of the valley and encompass around 2,100 acres.

One of the ways the department controls animal population in the area is through aerial shooting. DLNR staff in charge of aerial shooting noticed an increase in game mammals and plant damage in the area in 2005, said Espaniola. However, since then, the number of dispatched animals has been declining, according to data from ACETA (Aerial Capture, Eradication and Tagging of Animals) missions. Espaniola said that while the ungulate population has been decreasing without a barrier, the fence is a long-term solution to get “to the point where we don’t have to do as much aerial shooting or maybe not at all.”

While residents admitted that locating gates or climbing stepovers would create inconveniences, some said compromises must be made in order to protect the valley. Kamalu Poepoe of Aha Kiole said it’s the same way with the shoreline.

“Some of the things you have to do in order to protect the shoreline are not going to meet with the approval of being convenient to users,” said Poepoe. “… The purpose is to protect and preserve the area. That comes first.”

Buchanan added that she wants to see other alternatives considered before the fence is erected. In the meantime, Espaniola said they’re continuing to seek community input.

“Positively or negatively, anything you do or not do is going have one effect,” said Espaniola. “The thing is, do we … do nothing and hope it gets better on its own? Or do we … try do something with the main purpose of [the ungulate damage] getting better?”

The earliest the project would begin is in August, said Espaniola. The department has a fencing contractor, which plans to hire three to four Molokai residents for planning and field work. In the meantime the DLNR is seeking community input at meetings around Molokai. Another presentation will take place at the Kawela Moku meeting on Thursday, July 9 at 5 p.m. at Ali`i Fishpond.