Molokai used to be known as “Molokai `Aina Momona,” or the abundant land, for its plentiful food supply that fed a population many times its current size. Like much of the state, Molokai now imports most of the food found in its stores and restaurants — 98 percent, in fact.

But the food served on Molokai’s dinner tables is a different story. About 40 percent of food consumed comes from subsistence sources such as hunting, fishing, gathering and home grown fruits and vegetables, according to a 2012 study conducted by Sust `aina ble Molokai.

“[The high level of subsistence] means that if disaster hits, Molokai is actually better off than other islands even though food production is less [than other islands],” said Emillia Noordhoek, executive director of Sust `aina ble Molokai.

“There’s a strong subsistence component on the island, not only with meat, but also fish, and vegetables,” said Glenn Teves, a Molokai extension agent with the University of Hawaii. “I think we’re doing better than most islands when it comes addressing food security and sustainability.”

Areas of Improvement
The Sust `aina ble Molokai study, called the “Molokai Agriculture Needs Assessment,” identifies the island’s current ag resources, as well as what’s needed to increase production. Noordhoek said one of the biggest problems is a disconnect between local food producers and Molokai restaurants and grocery stores. To bridge this gap, the organization is working to create a Molokai distribution center with the goal of coordinating the needs of local vendors with farmers’ produce. That way, if a farmer doesn’t produce enough quantity to meet the market demand, for example, several farmers could work together to grow the product.

“In order to be food secure you have to overproduce,” said Noordhoek. “Our farmers have to be able to grow enough for stores and restaurants on-island, as well as ship off-island. That way we know we have enough.” 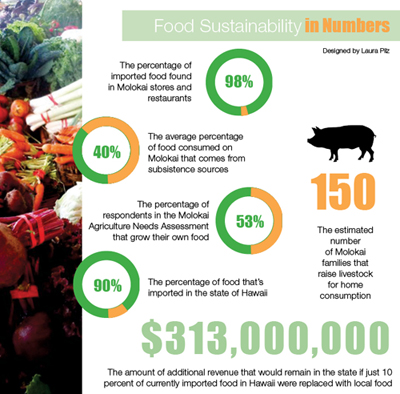 For Teves, market development is key.

“In vegetables, there are many times of the year when we produce more than the retail outlets can handle,” he said. “There’s a need to develop more marketing alternatives to increase sales and market penetration such as farmers markets, CSAs [Community Supported Agriculture, in which farmers deliver their produce directly to customers] and other direct sales options.”

Waialua Perafarm on Molokai’s east end, owned by Dano and Robin Gorsich, for example, has been thriving under the CSA model for nearly 30 years. They deliver boxes of organic produce to subscribers ranging from individuals to local restaurants and caterers.

While Monsanto is the island’s largest employer, organic farming is on the rise. Molokai boasts some of the largest organic farms in the state, said Teves.

For those bigger farms like Kumu Farms, which markets large quantities of papaya and herbs off-island, they have had to continue marketing outside Molokai to survive. While owner Grant Schule said last year they will continue to farm on Molokai, he also opened a farm on Maui to sell produce more easily and economically to Maui vendors.

For Jonathan Jefts , who’s been farming on Molokai since the 70s and whose operation produces about 85 percent of the salad and slicing cucumbers sold in Hawaii, consistency, quality and reliability are essential to success.

“You have to be there in in the market every week,” he said. He sells about 50,000 pounds of cucumbers per week to a distribution network of wholesalers who supply “every little restaurant and grocery store [around the state.]”

Farm to School to Farm
The distribution center Noordhoek is suggesting could also increase the amount of local food served in school cafeteria. Molokai schools serve varying amounts of local foods to their students — and increasing those values is something Noordhoek believes is important to the food sustainability puzzle. Molokai High School, for example, spends $400,000 to feed its students annually, all of which is spent on imported food, according to Noordhoek.
Sust `aina ble Molokai is part of a statewide initiative called the “Farm to School, School Garden Statewide Hui” to plant student-run gardens, and introduce nutritional education and locally-grown food into schools. At a state level, the group — with members on every island — focuses on advocacy and bills that promote connections between schools and local food. Locally, the Molokai School Garden Network is already working successfully to guide students in growing their own food on campus.

Not only does exposing students to growing and eating local foods boost personal health as well as local economy, it also could help increase lagging numbers of young farmers.

The average age of farmers in Hawaii is 59, according to a study conducted by the Department of Business, Economic Development and Tourism (DEBDT). Many are concerned that local agriculture is a dying occupation, and ag leaders across the nation are stressing the importance of fostering a younger generation of farmers.

To that end, many programs are available on Molokai to help educate those interested in farming and agriculture. Along with Sust `aina ble Molokai’s efforts to introduce gardening into local schools, another opportunity is the Molokai Native Hawaiian Beginning Farmers Program, an initiative of the University of Hawaii Extension Service office and open to homesteaders.

“About 32 homesteaders went through training, and about 50 percent are in different stages of production,” said Teves. “We anticipate another 15 percent will start up in late spring.”

The Beginning Farmers program is one of many opportunities to receive ag education. The UH Extension Office regularly offers training opportunities and UH Maui College Molokai offers classes and various degrees in the field of agriculture. The Kuha`o Business Center assists farmers in business development. There is also a variety of funding and incentive programs available through the US Department of Agriculture, among other opportunities.

“The key to developing new farmers is to develop a safety net for them and develop infrastructure that they can benefit from, including tractor services, shared packing facilities to address emerging food safety issues, and also marketing as a group,” said Teves.

Meat Production
While agriculture is one piece of the puzzle, Jack Spruance of the Molokai Livestock Cooperative said drought is causing a decrease in production of livestock, leaving the coop struggling to fill their orders. Spruance said the coop regularly supplies five Molokai restaurants and stores with meat, but said off-island accounts like Foodland – where “customers prefer our meat” – have gone unfilled for the past three months because of the shortage.

“The herd sizes for ranchers that participate with us are shrinking” due to lack of forage, said Spruance. Even with the recent rain, ranchers aren’t likely to increase their herd size for fear of continued drought conditions. As a result, Spruance has had to bring in off-island livestock in order to keep the operation running.

The co-op markets through several venues, said Spruance including Molokai stores and restaurants, some off-island vendors, and retail sales directly from the co-op’s store. But there’s something surprising about the co-op’s retail sales.

Spruance said most of their foot traffic is from transient residents and tourists. Only about 15 percent of retail sales directly from the Ho`olehua business are from local residents.

“People aren’t used to buying local,” he said. “How do [Molokai producers] compete with food from mainland? … As a producer, whether you offer meat or vegetables, I don’t think our consumer base is broad enough to make a farm [economically successful].”

For the Livestock Co-op, Spruance said the key is to develop relationships both on and off-island, and to stabilize the flow of animals – whether it’s cattle, pigs, sheep or even chickens. In June, the business is also bringing in a guest speaker to help farmers and ranchers learn to best utilize forage and plan grazing techniques to maximize production.

“On Molokai, it’s especially complicated,” said Spruance. “Whether you’re small or large, how do you get that much money out of your farm to feed your family? It’s pretty tough.

“We’re never going to solve this question individually — we have to do it as a group.”

Statewide Outlook
An estimated 90 percent of food in Hawaii is imported. Last year, DBEDT and the state Department of Agriculture compiled a strategic plan for Hawaii called Increased Food Security and Food Self-Sufficiency Strategy. The report examines past and current levels of self-sufficiency, and outlines objectives and policies to improve the amount of locally grown food consumed.

“The economic impact of food import replacement is significant,” it states. “Replacing just 10 percent of the food Hawaii currently imports would amount to approximately $313 million which would remain in the state.”

According to the study, while the state is considered self-sufficient in some vegetables and fruits, weakness lies in products such as eggs, milk and livestock. In the 1970s, Hawaii had 120 milk operations, for example. Today, there are only two dairies in the state, according to the report.

While food self-sufficiency has decreased on Molokai and throughout Hawaii, recognition is an important step toward improving the amount of locally grown food consumed.