Feathers of the Rainbow 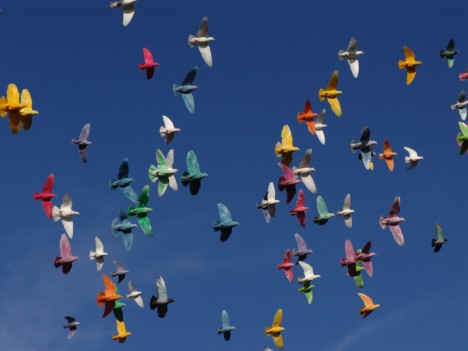 There’s no place like home – especially if you’re a pigeon. Molokai Rainbows, Clay Adachi’s business of releasing multi-colored pigeons for events around Molokai, brings smiles to awed onlookers as the birds swirl in unison overhead before heading straight home to their roomy pens in Adachi’s backyard.

“Ninety-nine point nine percent of the time, they all come home,” he said.

Referred to as homing pigeons, racing pigeons (a sport practiced around the world) and carrier pigeons, the species have been used for thousands of years to carry messages hundreds of miles before mail service or the Internet. While the navigation methods pigeons use are highly debated, many scientists believe the birds use the earth’s magnetic field to find their way. Adachi’s birds can fly home all the way from Maui, where he occasionally releases them for training.

Raising birds has been a lifelong passion for Adachi. He developed a special fondness for white pigeons after he was given a pair when he was young. Now, he owns about 150 birds, something he got back into, he said, more than 15 years ago. After that, “I figured I’d rent them out to pay for their own feed,” Adachi explained.

A Day in the Life

Cooing and fluttering, Adachi’s flock of pastel-colored pigeons enjoys personal care and daily flights from their pens in Manila Camp. Every day, he releases the birds in rotations: some early in the morning and the others at five in the evening to get exercise and maintain their conditioning.

“Our neighbors know what time to come home from work when they see the birds fly home,” chuckled Adachi’s wife, Diane, who helps raise the birds and finance their expenses.

With high cost of feed and supplies, Adachi’s side business doesn’t bring in much income. So why does he do it?

“The love of it,” the Adachis reply in unison.

In addition to their daily flights around town, Adachi releases the birds from the island’s east and west ends to build their stamina. The birds are usually home before nightfall.

“They get lazy flying around here,” he said.

Adachi also flies his pigeons from Maui. While the homing instinct is intrinsic to pigeons, Adachi does help strengthen it by challenging his birds. About 80 percent of the birds he takes to Maui come home, he said, which both proves their worth and weeds out the flock. He uses more experienced birds to train the young ones.

Maureen Nakashima owns a similar business on Oahu called the White Doves of Koolau. Nakashima and Adachi have exchanged birds over the years to help in the selective breeding process. She said her birds fly home from anywhere on Oahu, though she doesn’t take them off-island. Her voice hinted at respect when she mentioned Adachi flies his birds from Maui.

“His birds are good birds,” she said.

Adachi uses color-coded tags to mark all his birds according to the year they were born. He also tags the birds specifically when they fly to Maui, in order to track their return rates. Tags identify the owner and the year, as well as contact in case the birds are found, Adachi explained in the pigeon house, as he expertly wrangled a bird in one fluid motion and smoothed its pearly white feathers in his hand. He keeps tagging notations in pencil markings covering the shed walls.

Pigeons can live up to 35 years, according to Adachi, and he said he still has some of his original birds.

Adachi said the biggest challenge of his business is the health of the birds.

“They have to be in top shape to fly,” he explained, and keeps an individual home to treat it if it’s sick. It’s their weight that indicates sickness. He gives the birds electrolytes for energy before and after a long flight. He said feral chickens and untagged regular pigeons can spread disease.

Colors of the Rainbow

Adachi’s birds are known for their beautiful colors. He dyes the naturally white birds using food coloring to achieve a variety of bright colors. The dye does fade, and Adachi freshens up the colors before they fly for an event. It’s a technique he has gotten down to a science.

He keeps the food coloring mixtures in mayonnaise jars in the fridge, and warms it up before pouring the liquid into a small pan.

“I dip the birds right in and throw them up on the roof to dry,” he chuckled. 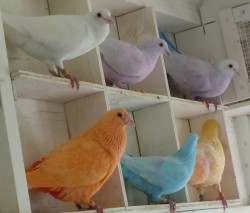 It’s important that the dye can dry completely before Adachi puts the pigeons in their boxes to transport for release. If the food coloring is still wet, it will rub onto other birds for some unplanned rainbow colors.

The food coloring is harmless to the health of the birds, though it does pose one challenge: they can’t fly in the rain. The dye, Adachi explained, absorbs water so it inhibits the birds’ ability to fly under wet conditions because their feathers don’t repel water as well.

He began dying the birds’ wings years ago as a way to identify them. That’s how he got the idea to color some of the birds for various occasions – like using red, white and blue birds for veterans’ events.

Events
Larry Helm, commander of Veterans Caring for Veterans, said releasing the patriotic-themed pigeons at veterans’ events is a way of “respecting the veterans to the max.”

“Veterans feel special that they can light up sky with all these colored pigeons in honor of those who have served,” said Helm. “The response has always been ‘wow.’”

Adachi, an Air Force veteran himself, said he’s been releasing birds for the veterans for years, free of charge.

Normally, his rates vary with location, from $75 around Kaunakakai, up to $200 on the island’s east and west ends, according to Adachi.

He flies the Molokai Rainbows at birthdays, weddings, funerals – “anything and everything.” He said he gets a lot of inquiries, and one comes through every couple of months. Since the birds can’t fly in the rain, Adachi said he has to play it by ear, and can offer refunds if the weather falls through.

“We’d love to grow this into more of a business,” Diane Adachi said.

If you’d like to book Molokai Rainbows to add a special touch to your next event, call Adachi at 553-5580 or email dcmolokai@hotmail.com.