Few residents expect to stand in long lines on Molokai, but Oct. 10 was an exception. Shoppers began forming lines at 6 a.m. in front of the Kaunakakai’s new Jeans Warehouse, and by late Friday evening, the line was still going.

“This is such an exciting day,” said Jimmy Duvauchelle, who, along with Naomi and Claude Duvauchelle, came to bless the business before its 10 a.m. opening. “…My only regret is I got three granddaughters [who are going to] cost me money!”

Nearly 70 people, from granddaughters to grandparents, stood outside when the Hawaii-based juniors fashion outlet officially opened its doors on Ala Malama Ave. in the location of the former Molokai General Store, which closed in August. As the building has a maximum capacity of 49, Jeans Warehouse Chief Operating Officer Cindy Mikami had to count off and limit the groups entering the store. 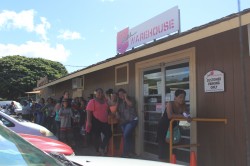 Customers waited hours for the 10 a.m. opening of the store. Photo by Colleen Uechi.

“I was excited because there’s finally a store [like this] to buy clothes from on Molokai,” said Molokai Middle School student Kaitlin DeRouin, who has shopped at Jeans Warehouse on Maui.

Sharlah Gloor, one of 12 new employees at the store, agreed that the location offers residents more shopping convenience.

“I’m sure there’re a lot of girls over here that [like] to be fashionable,” Gloor said, “but it’s hard when you have to either fly off island or you have to shop online and wait for a month.”

The company noticed that numerous Molokai customers shopped at the store’s outer island locations, but multiple plans to expand to Molokai fell through for over a year. Finally, a friend put company personnel in touch with brothers David and Jon Mikami, owners of the former Molokai General Store. Since the building is zoned specifically for retail, the Mikami family had been searching for stores to fit the bill, and finally settled on Jeans Warehouse.

“I know that Dad and Uncle Jon wouldn’t have just taken anyone as a tenant,” said Kimberly Svetin, president of Molokai Drugs and daughter of David Mikami. “It was critical that it was a local company.” 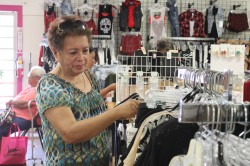 Jeans Warehouse, which was started in 1986 by Linda Holt, now has 29 locations throughout Oahu, Maui, Kauai, the Big Island and Guam. The company is 100 percent employee owned; Cindy Mikami, who has no relation to the Mikami brothers, explained that Holt installed a plan that allows employees to hold stock in Jeans Warehouse after they work for the company for a couple of years. All of the employees at the Ala Malama store — from Molokai-born Gloor to store manager Melissa Ocampo — are Molokai residents, which Svetin said is “huge” for a town as small as Kaunakakai.

“Our corporate headquarters is in Hawaii…. We’re a kama`aina company,” said Cindy Mikami, who has been working for Jeans Warehouse for 31 years. “I think it’s a win-win for the Molokai people as well as Jeans Warehouse.”

Jeans Warehouse offers clothing, shoes and accessories for juniors, men, women and keiki. The store recently added a boys’ toddler section and a casual menswear section with shirts and shorts. Jeans Warehouse is open Monday through Saturday, 10 a.m. to 8 p.m., and Sunday 10 a.m. to 6 p.m.

One Response to “Fashion Frenzy”