Farming in the Shade 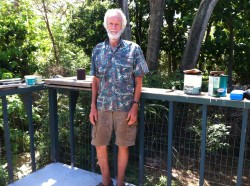 Joe Kennedy stands on his porch, surrounded by a food forest that has provided crops for seven years.

Along Hua`ai Road in Ho`olehua, there’s a wooded area grown over with weeds and bushes. This area is disguised as a simple, unkempt forest, but within it lays a flourishing garden of fruits and vegetables, all growing in the shade.

Molokai resident Joe Kennedy is the man behind the food forest. He began planting crops there last March, and a year later he has healthy, productive plants that use each other for support and protection. Avocado, taro and spinach are just a few of Kennedy’s crops. He founded the forest based on the idea of permaculture, a conservation theory that reflects his own love for the earth and a desire to preserve the land for future generations.

“I intentionally did not use one drop of synthetic fertilizer of any kind,” Kennedy said about his garden in the shade. He said he created the food forest by examining the principles of nature – how different systems work together to produce and multiply. 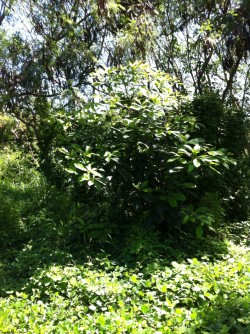 What looks like an overgrown thicket is actually a spot in Kennedy’s food forest where a year-old avocado tree grows healthy.

The crops are perennial, meaning they grow pretty much year-round, year after year. The food forest Kennedy created in his own yard near his roadside spot has given him crops for seven years without him replanting them.

This saves time, effort and money, he said, which means this could help solve hunger problems.He doesn’t plow the ground or clear trees for his garden. Like any other forest, it grows in layers. The trees develop first, creating a canopy of shade. Then there are the layers of shrubbery, plants and smaller trees, many of which produce fruits and vegetables. Ground coverings like vines and moss are the final addition to the garden. Kennedy welcomes bugs and vines. They provide nutrients that compensate for the lack of sunlight. This method of farming is one concept of permaculture.

“My vision for Molokai is the same as my vision for the world,” Kennedy said. “It’s so easy to grow crops using these methods. There should be an abundance of food everywhere, so everyone has more than enough to eat.”

He said he believes this can happen through education and raising awareness about recycling and composting. That’s one of the reasons he created the food forest – to share his success with others with hopes fellow farmers may be able to take up some of the practices for themselves. He wants individuals to develop a strong connection to nature, something he believes is lost due to the development of farming machinery.

“We should be putting nature on a level way above anything else,” he said. “We’re supposed to worship God through nature. You don’t want to worship a big red tractor with 16 wheels.”

He added that he is not completely against technology and machinery, but he does think they are being misused.

“I think the idea is out there, and I think people are catching on,” Kennedy said about permaculture.  “Small, tiny things have enormous, lasting results.”