Farming for the New Age

Tucked away inland among the forests in Waialua Valley exists a farm that claims no fields, no pests, no weeds and yet still produces over 50 varieties of produce on only one acre of land. While many would call this place a myth, Waialua PermaFarm owners Dano and Robin Gorsich simply call it home. 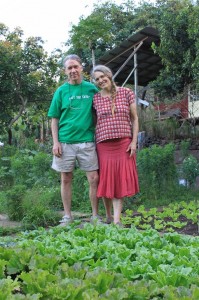 A permafarm is an embodiment of permaculture, a growing movement that pursues the development of sustainable ecological design. In recent years, permaculture as a movement has been gaining increased attention due to the need to produce more with less, according to Dano. The San Diego native came across the concept of permaculture on Maui in 1981 when he took a class instructed by Bill Mollison, often recognized as one of the founding fathers of permaculture. Inspired by Mollison’s teachings, Dano eagerly brought his newfound knowledge to his home on Molokai in 1992, and together with his family, started one of the first permafarms in the world.

“We don’t have fields, we build edges,” said Dano. “We don’t have weeds, we have duck food, trash mulch and green manure. What do we do about bugs? They work for us to thin out the weak plants.”

Essentially, permaculture is thinking about situations in terms of solutions instead of as problems, said Dano.

While it may seem all too synergistic for more traditional agriculturists, permaculture has been working for the Gorsichs, who have successfully operated their “Ma-and-Pa” farm for over 25 years.

Operations
So how, exactly, does it work? 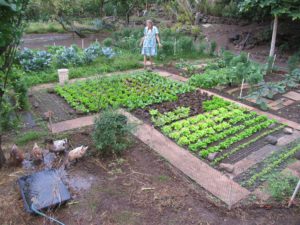 One of the most basic ideas practiced at Waialua PermaFarm is the constant rotation between duck foraging and vegetable gardens. Because the fences, or “edges”, are moved every three months to a year, Dano describes this poultry-foraging system as “an amoeba where everything keeps changing.” The animals, he said, do the work as land tillers, fertility source and insect control. By rotating the plots of land they garden, the Gorsichs reduce the amount of time spent fertilizing or weeding the soil while still producing healthy, nutritious and beautiful produce.

Also, Waialua PermaFarm makes it a priority to plant many varieties of different produce, ranging from varieties of lettuce, papaya, green beans, eggplant and whatever else is in season. This “polycultural system” ensures that the farm yields produce year round so that customers always have a large selection of fresh fruits and vegetables, said Dano. 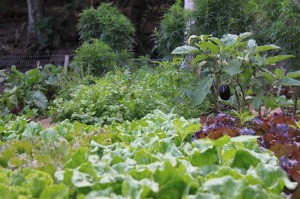 When they realized they were producing enough food to sell, the Gorsichs started selling to a few vendors in town, like the Outpost Store. However, local residents loved their produce so much that they requested boxes straight from Waialua PermaFarm. Within four years, they were delivering 25-30 boxes a week to various drop-off locations on Molokai, a service known as community supported agriculture, or CSA.

“We didn’t even try to start a CSA,” said Robin. “It just happened.”

CSA is a locally-based model of agriculture and food distribution in which subscribers receive weekly shares of seasonal vegetables and fruit.

Resident and raw food cook Artice Swingle has been a subscriber of Waialua PermaFarms for over eight years. She is well-known on the island for tasty, raw meals –or meals not cooked over 110 degrees –for the past six years out of her Kalae home.

“I can guarantee that the nutritional quality of [their] produce is the highest you can find because their composting methods, the soil amendments which are all natural…and they have an interaction with plants,” said Swingle of Waialua PermaFarm’s products.
Currently, the farm distributes to Outpost Natural Foods, Friendly Market, a few local chefs and caterers and a number of residents on Molokai.

A Shift in Focus
While Waialua PermaFarm has served as a pioneer in agriculture not only on Molokai but in the permaculture community, the Gorsichs said they hope to shift their focus from production to teaching classes full time at their home studio in Waialua.

Both have attended a week-long permaculture teacher training course that certifies them to teach, according to Dano. He has already taught a permaculture class at UH Maui College, Molokai in 2004.

“It would be selfish for us to not share what we know about permaculture,” said Dano.

Ultimately, Dano sees permaculture design –that is, economic design that maximizes output while maintaining minimal amounts of labor –applying to architectural design, urban planning, banking systems and even water conservation plans. The Gorsichs have designed the roof of their own house so that a breeze constantly blows through the house, eliminating the need for air conditioning even in hot summer months.

“[In permaculture] there is infinite variety and always opportunity for new things to happen,” he said. “You just have to learn to get out of your own way.”