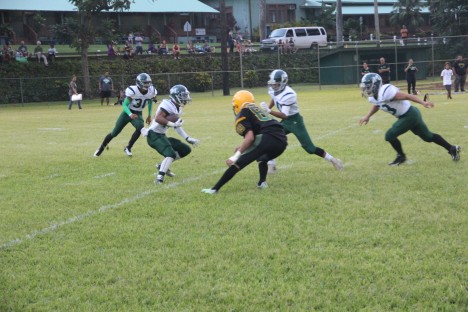 The Molokai Farmers football team made a long road trip to Hana over the weekend and came out with an impressive 87-14 win. Molokai is now 3-0 in league play and 4-0 overall.

“Our team came to play tonight and they did well and I am very proud of them,” said Head Coach Mike Kahale. “… Our defensive coordinator and all of the coaches on that side called a great game. And our athletes … executed and that’s all we can ask of them.”

Senior running back Alden Abafo scored four touchdowns, including two long runs and one 79-yard kickoff return for a touchdown.

“Both sides of the ball played good,” said senior offensive lineman Kuikamoku Han. “The offensive line made some good blocks and the running backs made good reads. The defense was able to get off the ball quick and executed well.”

Senior William Dela Cruz had a punt return for touchdown and middle linebacker Ena Victorino had a fumble return for a touchdown. Both also led the defense with strong games.

Hana scored their first points at the end of the first half on a long run by Isaiah Lind. In the fourth quarter they had a 10-play drive that resulted in a touchdown by Sheldon Frias.

Kihei Charter, who Molokai was supposed to play on Oct. 17, has forfeited the rest of their games this season due to a lack of players. The Farmers will have to wait until they host a semifinal playoff game on October 24.