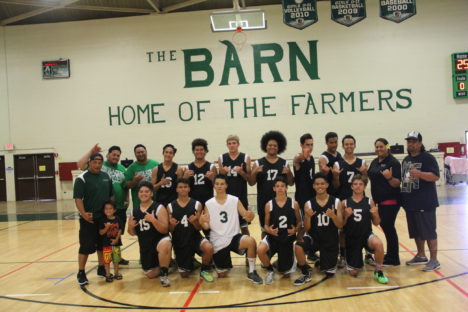 The Molokai High School  Boys Volleyball team improved to 3-1 in Maui Interscholastic League Division II play with wins over Hana last weekend at The Barn in Ho`olehua. The Farmers had two bye weeks after splitting two games at Seabury earlier in March but got the wins they needed against the Dragons.

Sterner was happy his team got the wins.

“I’m proud of our team on getting these 2 wins it was really tough having a two week bye but we practiced hard and got the job done now we have to prepare for our next game,” he said.

“Our boys did really well over the weekend, but in order to get where we want to go we still got a lot of work ahead of us,” he said. “It’s a long road ahead of us, but anything is possible if we build our family to be tough and strong. We control our own destiny so the harder we practice the better we’ll be.”

The Farmers will host Lanai this weekend and will play every weekend in April — on the road to Hana April 7-8, Home vs. Seabury April 14-15 and on the road at Lanai April 21-22 — before the MIL DII Tournament at Hana on April 27-29.