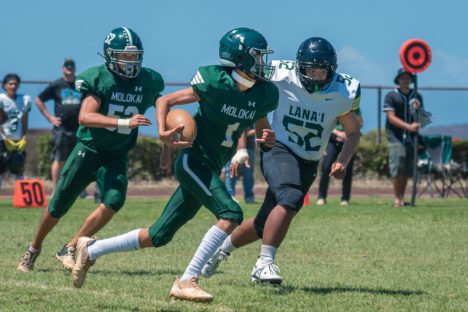 The Molokai Farmers Football team put on an excellent game this weekend against Lanai Pinelads. Taking the win at 41-6, the Farmers took the start to the season with the supporting community and spirit of the cheerleaders right beside them. Head Coach Mike Kahale with his staff and players worked hard to start the season strong.

Reflecting on the game, Kahale was pleased with the effort. He said it feels like years ago since the last real season of football, with only the one 11-man controlled scrimmage with the Na Ali’i of King Kekaulike High School in between. The team’s last official eight-man game was in the fall of 2019.

Kahale said the coaches did awesome as well as the players. For many players, Saturday’s game was their first on their home field. Coaches stepped up to new roles as well, such as Kaimana Kahale assuming the position of defensive coordinator.

“I’m happy for the players. We’re just excited to be back in football and hoping for a really good season… It feels good to be back to normal in Farmers Football,” said Mike Kahale. 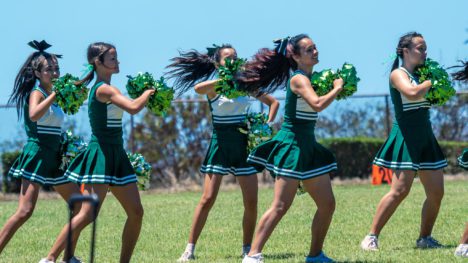 Players said the game was successful and full of learning.

“We felt like we did our job and executed well,” said senior Jonah Sahagun.

The team had multiple touchdowns and efficient defense.

“The best part of the game was doing our job, getting hits, getting tackles…” said senior Nui Leeweeks.

Not only did the football players have an excellent performance, so did the cheerleaders. Molokai’s squad cheered on the boys every quarter and entertained the crowd throughout the game. Half-time brought even more green and white spirit with a show stopping performance of dance, cheers and stunts.

The Farmers next game is a non-league 11-man game against Waialua on Oahu on Sept. 9.