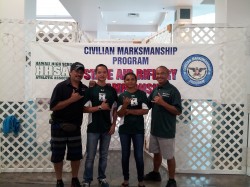 Two Molokai shooters represented the Farmers at the state championships for air riflery two weeks ago. Senior Pono Chow on the boys side and sophomore Pomai Gomes from the girls team gave it their best shot after the Farmers came in third in the Maui Interscholastic League (MIL) championship Oct. 19.

Chow came in 24th place out of 42 male shooters in the state competition with 495 points out of a possible 600. Gomes finished in 27th place with 490 points out of the 42 girls competing.

First-year shooter Gomes improved from the 478 points she earned at MILs.

“She did really well, she should be proud of herself,” said Gorospe. “Pomai has so much talent in her.”

The Farmers air riflery team has had shooters competing at the state level for the past three years.

“Molokai has a lot of hunting, so we gotta show what we got,” said boys coach Henry Corpuz.

Besides safety, the most important things in the sport, Corpuz said, are focus and relaxation.

“You need to go in and be positive,” he said, saying he tells students they need to leave any stress from family or school when they walk in the door to practice. “They need to come in happy. What they learn in here, it’s good practice for outside [the sport] too.”

As they practiced for the state competition, both Chow and Gomes moved slowly and smoothly with quiet precision as they took aim, perfecting their shots in prone, kneeling and standing positions. Targets 30 feet away are graded in a point system, with the bulls eye being 10 points, and shots decreasing in value away from the center. Shooters must hit 20 targets from each position within time limits.

“[As I’m competing] I think about getting a medal… and [as I pull the trigger] I just think about the target,” said Chow. 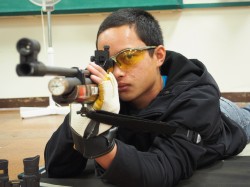 Chow said he shoots with both eyes open so his face doesn’t squint and tense up. A strap around the upper arm of the shooter attaches to the gun to help stabilize it. Chow said the strap also serves to mute the pulse of the shooter. If the pulse from your upper arm transfers into the gun, the rifle will bounce as you take aim.

“If I could stop by heartbeat while I’m shooting, I would,” said Chow.

He said the biggest challenge for him has been self-control when pulling the trigger and staying steady. He added that his attitude and mind-set have changed since he started air riflery three years ago.

His advice to beginning shooters is “be a competitor and not a shooter — have a drive to win. Keep at it.”

And that’s just what Gomes, who started on the team this year, has done. She said when she shoots in competition, she zones everyone else out — and that focus as paid off.

Gorospe said despite the popularity of hunting on Molokai and the large numbers of students who come for air riflery at the beginning of each season, few stick with it. Out of 31 Molokai High students who came to the first practice, only 14 boys and girls were there at the end of the season.

He said next year, they may try an open house event for air riflery for interested shooters to try it out before the season begins to attract more interest in the sport.