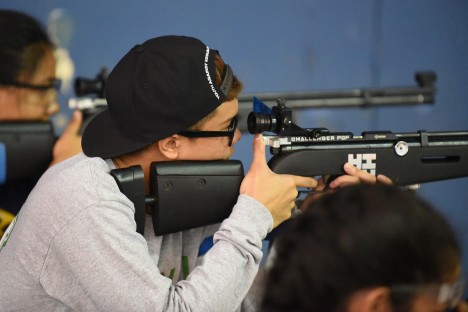 Molokai’s Michael Corpuz prepares to take a shot during the MIL Championship. Photo by Matthew Thayer of The Maui News.

“While their performance throughout the entire season … was impressive, I am most proud of how they handled the pressure that comes along with being the team to beat,” said boys’ coach Daniel Imakyure.

The girls’ team, whose first air riflery title came in 2010, finished fifth, with Hi`ilani Kanuha as their top individual shooter in 10th place overall. Kanuha qualified for the state championship for the first time and competed on Oahu on Tuesday, Oct. 28.

On the boys’ side, Imakyure said that Nip’s first-place finish also guaranteed him a place at states, along with teammates Joshaviah Cabreros (third place), Jershon Ka`alekahi (fourth) and Michael Corpuz (eighth). Each of these shooters has won an individual competition during the regular season.

“These boys competed with fewer resources than most teams, and [with] the additional stress of traveling from Molokai for each competition,” said Imakyure of this year’s history-making squad. “They overcame these obstacles to win and remained humble throughout the season. A testament to both their skill as shooters as well as their quality of character.” 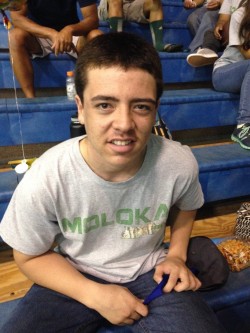 Maui High took first place overall in the girls’ competition. Hubbard said he knew Maui High’s girls would be tough to beat, but added they were a little surprised by the Sabers’ high tournament score of 1,940. During the regular season, the Sabers rotated their best shooters in competitions before having the whole team shoot during the MILs, piling up a higher score than teams had come to expect from them throughout the season.

While Hubbard hadn’t heard of teams doing it before, he said it was simply a strategy, and that Molokai “might look into that next year.”

The Farmers traveled to Oahu on Monday for Tuesday’s state air riflery championships. During the regular season, shooters take shots at one target for each of the three positions of standing, kneeling and prone (lying down). Each target includes a series of rings, with a bull’s-eye worth the most at 10 points. In the MILs and state championships, shooters get two targets for each position, but the 33-foot distance and points system remain the same. The field at state championships included the top 60 boys and 60 girls from around the state.

“We have not changed anything in preparation for states, as everything we’ve been doing thus far seems to be working well,” Imakyure said Sunday.