In a continuation of a two-part series, the Dispatch takes a look at the four sports kicking off this fall. Read Part 1 here. 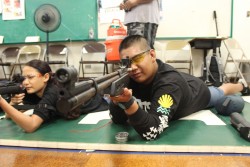 “When you only have the minimum, if one shooter has an off day you’re stuck with that score,” said second-year boys’ head coach Daniel Imakyure, since the team can usually take the top four scores. “That presents the challenge.”

The Farmers are up for it. Returning shooters Jershon Kaalekahi, Joshaviah Cabreros and Cody Nip were all individual champions throughout the last season and led the Farmers to their first ever MIL boys’ title in the sport. New shooter Ekolu Greenleaf rounds out the squad.

“Our kids make due with a lot less resources [than other schools]. It’s one thing we’re really proud of is they’re able to hold their own,” said Imakyure. “… Ideally we’d like to win MILs again and go to states.”

For Nip, the secret to being a pinpoint marksman is simple.

“When I shoot, I just try singing in my head,” said Nip, who also won the MIL individual title. “For me it just keeps me focused, and that’s how I shoot good.”

Interest in the sport was overwhelming this season. More than 20 girls signed up, but because of limited equipment, they had to make cuts, said second-year girls’ coach Chinky Hubbard. The final team includes six returning shooters and three new ones.

“We have all the talent and we just need them to shoot their best,” he said.

Last season, the girls’ team finished fifth at MILs. Senior shooter Hiilani Kanuha qualified for states for the first time and is returning this year.

The team relies on the experience of Kanuha, senior Keaa Davis, who Hubbard believes can turn in a strong individual season, and junior Sonja Angst, who had an “amazing” turnaround last year and is the team’s sleeper, said Hubbard.

“Each of us encourages each other to do better and strive,” said Angst. “… [It takes] practice and more practice.”

In air riflery, teams compete in the three categories of standing, kneeling, and prone, or lying down. Each target includes a series of rings, with a bull’s-eye worth 10 points and each outer ring worth a point less than the one before.

Molokai’s first competition for both the boys and the girls will be a postal shoot this Saturday, in which all schools compete in their home gyms and submit their scores to the league. The teams travel to Maui the following week for a live meet.

To defend their Division II MIL title, Molokai’s cross country runners are literally going the extra mile. To prepare for three-mile meets, they run up to five miles on short days and up to 10 miles on long days. They run repeats on the track that include a mile warmup, two rounds of 400-meters and one of 800 meters and a three-mile run.

“It’s been a long time since we could do hill sprints and track repeats this early in the season,” said Ross, who has 15 years of experience coaching. “… We have a good group of boys. They’re committed, they don’t spend too much time goofing around.” 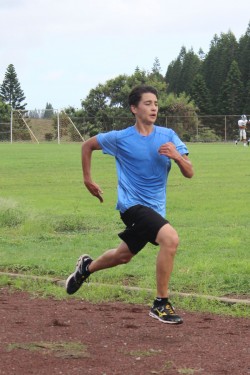 The Farmers have little time to lose. Due to financial constraints they’ll only compete in two September meets before the MIL championships at the end of October, a yearly problem for sports like cross country in which every meet is away on Maui. However, the team’s lone senior, Keaolono Ross, sees it as an opportunity.

“Not going to the meets also limits my opponents’ knowledge of my strengths,” he said. “They know that I run fast, but after this month of training after the races we [plan to attend], they’re not gonna know how fast I’ve become.”

Molokai will attend league meets on Maui on Sept. 5 and Sept. 12.

Like the boys, the girls’ cross country squad also has their eye on states. To get there, they know they’ll have to be mentally tough for a season of hard running.

“[It’s] believing that you can do it and let your mind run your legs,” said senior Jennifer Costales-Sanchez. “… Don’t worry about anybody else in front of you.”

Head Coach Eugene Santiago said if his runners aren’t mentally ready, “when they hit the road, they’ll hit the wall.” In practice, the teams are mixing mental training with physical conditioning. Santiago runs with his team each practice to help give instruction and gauge each runner’s level of conditioning.

He said this year is somewhat of a rebuilding season, but with the majority of the team being underclassmen, the program has “a lot to look forward to.”

“It also depends on how much they’re willing to put in to achieving their own success,” he said. “I’m just here to kind of guide them and help them out. They have to make that choice and that decision.”