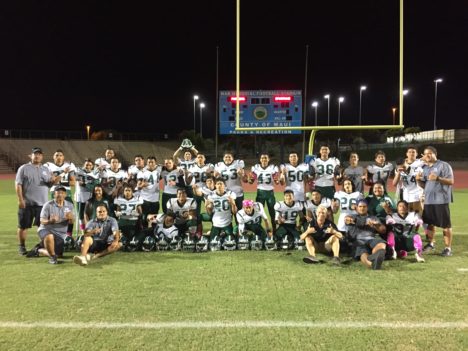 It was Thursday night under the lights of War Memorial Stadium in Kahului, Maui last Thursday. The Molokai High School eight-man football team was ready to face off with arch rival Seabury Hall for the biggest game of the season, the Maui Interscholastic League Championships.

“Seabury put together a great game plan and came at us with some new formations that took a while for us to adjust to,” said Head Coach Mike Kahale. “We found ourselves down 12-0 after an early score and turnover.  I knew that if we kept our composure and did not panic that we would be able to overcome.” 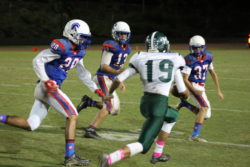 After a nail-biter first quarter, the Farmers did indeed overcome, and got back on track to take a 19-12 lead at halftime.

The running game was in full gear for Molokai as they had 346 yards rushing with Hauoli Caparida leading the way with 143 yards on 15 carries and two touchdowns. Braiden Asuncion ran the ball 10 times for 138 yards. Quarterback Jayden Dudoit-Tabilangan threw for one touchdown and ran for three more. Defense was the key is this game as the Farmers played well and had a crucial goal line stand in the second half that was a key point in the game.

Molokai won the game 45-25 to repeat at MIL Champions. The Farmers, 5-0, have won 11 straight games and captured their second title since restarting football here just a few years ago.

Senior Jershon Kaalekahi, in his first year of HS football and fresh off a 13th place state finish in Air Riflery, had a key defensive play as he intercepted a short throw over the middle and ran it all the way to the end zone for  a 50 yard touchdown.

“I have always loved playing football, and to have the opportunity to play for Molokai High my senior year was a treat,” said Kaalekahi. “To be MIL champs just made it even sweeter. It was an exciting season, especially that championship game. And even though we faced adversity, we came together as a team and came out on top.”

Kahale had words of praise for senior captain Dudoit-Tabilangan.

“[He] led the team downfield throwing a 10 yard strike to Shraedon Naeole-Starkey for our first score and then followed up with a quarterback sneak, and bootleg run for the next two scores,” said Kahale of the struggle early in the game. “Our boys had to dig deep as this was a game in which they were truly tested.  They showed resilience and never gave up.”

Kahale said the team’s defensive stand in the third quarter where Seabury had a firstand goal inside the five was huge, changing the momentum in the Farmers’ favor.

Senior lineman Nainoa Bishaw-Mokiao, who plays on both offense and defense like many of his teammates, helped lead his team to victory. 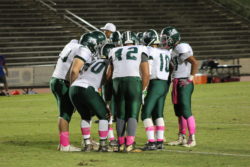 “The championship we won on Thursday night… wasn’t just us players and coaches relaxing and not putting in work — it took hard work, dedication, and sacrifice,” he said after the game. “This game wasn’t about who had strength, size and speed but in my eyes it was about who had more heart.”

His teammate, senior Decker Bicoy, a starting free safety and wide receiver, agreed there’s something special about their team.

“After playing four years at MHS, this team was surely the tightest and everyone played for each other and I am grateful,” he said. “That game was one of the best games I have played and it was nice being tested… I’m just glad we earned the privilege for the rest of our lives say we are back-to-back MIL Champions!”

Closing the season with a decisive win, Kahale is thrilled with the team’s performance.

“I am so proud of our boys for how they responded to adversity and continued to fight,” he said. “They showed that they had the heart of champion.  I could not feel any prouder.  I want to thank my coaching staff for pouring into the lives of these young men and our Molokai community for their continued support.”