Farmers Pack Up Rifles for the Season 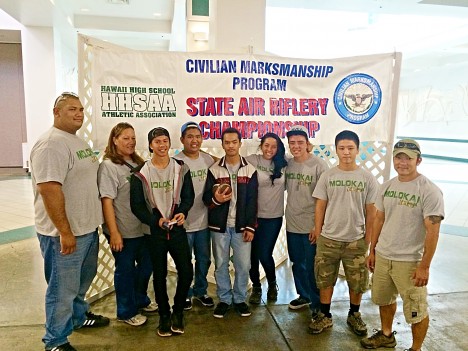 When Molokai’s history-making air riflery season came to an end, the Farmers were exactly where they wanted to be: at the state championship on Oahu. The MIL-champion Farmers shot their final competition last Tuesday, with the boys’ team coming in fifth out of seven boys’ teams and individual girls’ shooter Hi`ilani Kanuha finishing 50th in a field of 60.

“It was an eye opener and so much fun for the kids,” said girls’ coach Chinky Hubbard, who attended the state competition for the first time as a coach. “… We went over there and just tried to beat our scores that we performed at MILs.”

Kanuha, Joshaviah Cabreros and Michael Corpuz all bested their scores from the MIL championship, which uses the same format and scoring system as states. As the only girl representing Molokai, Kanuha shot 471 total points, while Cabreros (27th place out of 60) shot 505 points and Corpuz (21st place) finished the day with 511. Jershon Ka`alekahi (38th, 487 points) and MIL individual champion Cody Nip (40th, 486 points) also competed for Molokai.

It was a first-time trip to states for all of the Farmers shooters and their first-year coaches.

“They seemed a little nervous at first, but as the day went on and we actually started to shoot they started to relax,” said Hubbard. “They fit right in.”

Boys’ coach Daniel Imakyure said their shooters “did a lot” considering the fact that Molokai and other MIL schools only compete in one class of shooting during the fall season. According to Imakyure, many state-level shooters compete year round in multiple shooting categories that involve stricter rules and specialized clothing.

“I’m little disappointed that this is all we have to offer the kids at this point,” Imakyure admitted. “I’d like to see [the] MIL progress into precision shooting as well, to give our athletes a better chance at competing against their counterparts from other islands, as well as an opportunity to compete in college and beyond.”

Both Imakyure and Hubbard, who are police officers by day, plan on returning as coaches next year and have high hopes for Molokai air riflery. For the coaches, it’s all about getting their shooters “more exposure to the sport,” said Hubbard. They want to start the season a little earlier, with practices in the summer and possible clinics with other air riflery instructors.

The two are also looking forward to next year’s preseason coaches meeting, where they can collaborate on changes to the MIL’s air riflery program. One major issue, explained Imakyure, is that MIL shooters compete with 30 targets during the season but have to hit 60 targets during MILs and states. Some of the other islands, he said, shoot 60 targets all season.

“Shooting within the MIL is still evolving and improving,” said Imakyure. “My main goal is to continue to improve the program for the kids.”

Despite the disadvantages Molokai faced in both resources and experience, the coaches said they were “extremely proud” of their shooters in a season that included Molokai’s first ever air riflery MIL Championship in the boys’ team and individual categories.

“We got super good kids, well mannered,” said Hubbard. “They know what they gotta do. … They all had good heads on their shoulders and met our expectations.”