Farmers Outstanding in their Fields

Molokai High teams made a strong showing against league opponents over the weekend, bringing home wins on the water, the court and the mat.

Molokai’s wrestling team is short on funds but not on talent. On Saturday the Farmers left their first MIL meet of the season with six titles, the most of any team. Lahainaluna had the second best performance with five titles.

“I think we as a team didn’t really expect to do as well as we did,” said Kuikamoku Han, who won the boys’ 285-pound title for Molokai. “We have a lot of new people that are not familiar with the sport. … I know that we wrestled as hard as we could.”

“It was especially good to see some of our first year wrestlers do well,” said Coach Randy Manley. “This is the first meet of the season, so there’s still a lot of wrestling to do.”

Although the team only has funding to attend two of six MIL meets this season, Manley said they’re fundraising hard and staying positive in the meantime. 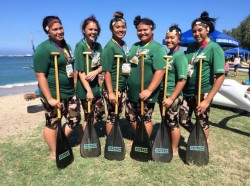 In the MIL’s third regatta and Molokai’s second race at Kahului Harbor, the Molokai girls’ paddling team finished second with a time of 4:40.45. Molokai’s crew was made up of Kelsie Espiritu-Tanabe, Kaitlynn Reich-Colipano, Kama Puailihau, Puna Paleka, Hii Kanuha and Kysha Kawano.

Seabury Hall’s girls won the race (4:30.63) and with the victory took their fourth consecutive league title.

With two races to go, Molokai is contending for a spot at the state championships. League officials will average each school’s top three scores and send the best two teams to states.

“They need to continue doing what they’re doing,” said Coach Stefanie Hubbard. “I’m trying to make them just focus on themselves. Never mind everything [else] that’s going on.” 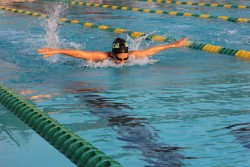 As a team, the Farmers finished fourth out of eight schools. The team finished second in the 200-meter freestyle relay in one minute and 44.55 seconds, which Coach Jess Ford said could get the team a consideration for states.

“It doesn’t guarantee a shot at going but it’s a potential qualifier,” she said.

The girls’ team finished seventh out of eight schools. Oceana Madani and Genevieve Kikukawa turned in Molokai’s best times. Madani finished sixth in the 100-meter butterfly (1:21.74), while Kikukawa had sixth-place finishes in the 100-meter backstroke (1:18.93) and the 500-meter freestyle (6:38.55).

Ford said the teams will be working on being more aggressive in races.

“They just gotta race a few more times so they can get the confidence to push harder,” she said. 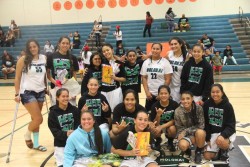 The girls basketball team (8-0) continued their unbeaten streak, winning two games at The Barn against Hana (0-8) over the weekend. The Lady Farmers held off a 21-point fourth quarter surge from the Dragons to win 48-36 on Friday. Camille Ledesma had 15 points and Hepuakea Falealii scored nine. On Saturday, Brooke Keliihoomalu poured in 15 points in a 40-30 victory over Hana.

With a few away games remaining before the MIL championships, sophomore guard Precious Rawlins said the team is working hard on their defense, which has carried them throughout the season.

“I wouldn’t trade them for the world,” said Coach Lee DeRouin of his seniors. “They come every day and provide good leadership, and they take care of their teammates.”

Following the girls’ lead, the boys’ basketball team started the season with wins. The Farmers (2-0) played Hana (0-2) at The Barn and took Friday’s game 53-30 and won similarly on Saturday, 51-30. 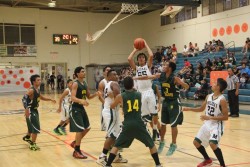 The Molokai boys topped Hana in a pair of weekend games. Photo by Rick Schonely.

Rick Schonely contributed to this report.