Head Coach Randy Manley said it best: “It’s always nice to be able to sleep in your own bed and not sleep on a wrestling mat in somebody else’s gym… but you also worry that they’ll be nervous wrestling in front of their family and friends and we just hope they shine in front of their home fans. And they did.”

The Molokai High School Wrestling team hosted a round robin tournament here on Molokai at The Barn last weekend. Five schools from the Maui Interscholastic League — Baldwin, Maui High, Lahainaluna, Kamehameha Maui, King Kekaulike and Molokai — competed on Friday evening and Saturday in front of a very supportive home crowd. It was quite a sight to see and the Farmers did well.

“Six MIL schools were represented here including last year’s state champions from Lahaina,” said Manley. “Hana and Lanai could not make it because of travel reasons. It’s big for us because we only get to host a tournament every other year.” 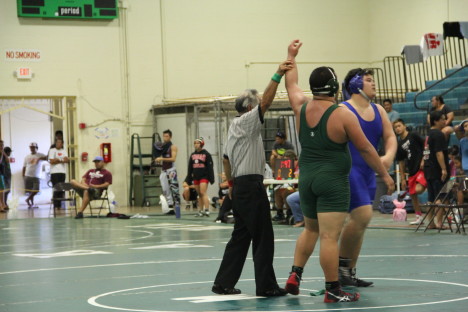 Kui Han won his heavyweight division at The Barn. Photo by Rick Schonely

“It’s a great privilege because we get to wrestle in front of our home crowd we get to sleep in our own bed and we get to show Molokai what we as wrestlers can do,” he said.

Senior Cendall Manley was happy this tournament came during her final senior season. 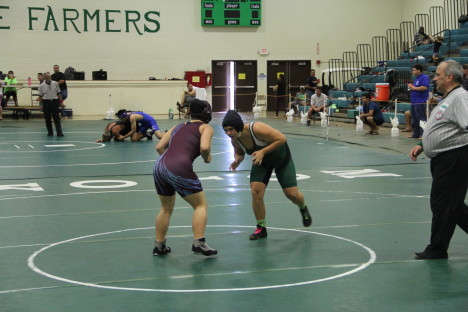 Molokai’s Cendall Manley faces off against her opponent from Baldwin during Saturday’s wrestling tournament at the Barn. Her win was one of seven Farmer titles during the weekend. Photo by Rick Schonely.

“I am really excited that we were blessed with this tournament since we only have this tournament here every couple of years and to have it during my senior year with all my friends and family here to see me is very special,” she said, adding her goals are set but wants to take it one step at a time.

“A state championship is within my reach and it is one of my goals to reach the state finals but we have to take it one step at a time and win the MIL championship first,” said Cendall Manley.

The team has two more MIL meets at Lahaina and King Kekaulike before the MIL Championship Tournament the second week of February. The State Championships will be on Oahu the week after MILs.