Farmers Gear Up for MILs, States 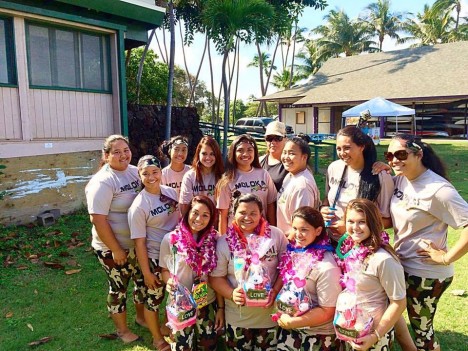 The Varsity II girls’ paddling team (front, with lei) made their debut on Saturday, while the Varsity I team qualified for states. Photo courtesy of Stefanie Hubbard.

Molokai’s girls had to race twice on Saturday to earn a place at the state championships. The Farmers finished third in the MIL’s final regatta and came in second in a tie-breaking race to earn the MIL’s last state berth.

“It was pretty intense and really nerve-racking, but we made it,” said paddler Waipuna Kelly-Paleka.

Seabury Hall had already been guaranteed a place before Saturday’s race. After Molokai finished third, the Farmers were locked in a three-way season tie with King Kekaulike and Kamehameha Maui, forcing a second, shorter race.

“Thankfully, during practice I have them do half-mile sprints nearly back to back,” said Head Coach Stefanie Hubbard.

King Kekaulike and Molokai took first and second respectively in the tie-breaking race and secured the final two places at the state championships, which take place Feb. 7 in Kahului.

“After the race it was so emotional, being that I’m a senior this year and we’re finally going to states,” said Kelly-Paleka. “It’s an honor.”

Molokai also debuted its Varsity II girls’ crew, who finished fourth in their race. Hubbard said she wanted to reward the Varsity II team’s dedication throughout the season.

“Despite not racing all season, they stuck it out,” said Hubbard. “They all continued to come to practice. They were the ones who have pushed the Varsity I crew and helped to make them what they are.”

Statistically it was the team’s second-best showing of the season, after the MIL’s first meet when six Farmers were crowned champions of their weight categories.

With all of the teams’ meets on Maui, Head Coach Randy Manley said at the beginning of the season that the teams only had enough funds to attend two meets. However, Saturday’s competition was the third meet they’ve been able to attend this season. According to wrestler Kui Han, who’s already taken the 285-pound title twice this season, the team has been fundraising by selling chocolates and beef jerky.

“It definitely has been a problem for us because we have to travel every weekend to enter into the tournaments,” said Han. “It is every athlete’s responsibility to sell their share so that it will benefit the whole team.”

Molokai learned from its mistakes over the weekend but still fell short twice against a towering Seabury Hall squad. The Spartans topped the Farmers on Friday, 62-33, and again on Saturday, 54-32.

On Friday, Seabury took an early lead and never gave it up, bolstered by Cameron Hanisch’s 12 points on four three-pointers.

Molokai’s Kaimana Kahale said the team made adjustments after Friday’s loss, and the next day it was the Farmers who took a solid lead in the first half.

“We kinda just worked on trying to get back to the fundamentals of boxing out and reducing our turnovers,” said Kahale. “We played more as a team the second game and … spread the ball around more.”

However, momentum shifted to Seabury as they scored 20 unanswered points and went on to win the game. Kahale said the Farmers had trouble clicking in the second half, allowing too many turnovers.

Molokai’s Michael Sterner led the Farmers in scoring on Friday with four three-pointers for 12 total points, and Edel-Marc Alvarez was the Farmers’ top scorer on Saturday with seven.

The Farmers fell to 3-3, while Seabury is now undefeated at 4-0. According to Maui News, the Spartans’ roster this season boasts six players at 6-foot-3 or more.

“They pretty much established themselves as one of the teams that we need to beat this year,” said Kahale. “They’re well coached, and it looked like they actually did their homework on us.”

In a pair of nail-biting match-ups against the league’s second-place team, Molokai came away from Lanai with a win and a loss, each determined by fewer than five points. The Lady Farmers beat the Pine Lasses 43-40 on Friday and lost on Saturday, 37-33.

On Friday, Precious Rawlins scored 10 points, Camille Ledesma had nine and Rebecka Adolpho scored eight. The Pine Lasses led late in the game, but Head Coach Lee DeRouin said his girls “did a great job” of moving the ball around and allowing a wide range of players to score.

“[We had] well-balanced scoring attack with eight girls in the scoring column,” said DeRouin. “We were able to control the tempo of the game in the final minutes and made some key free throws down the stretch.”

On Saturday, Ledesma, Adolpho and Brooke Keliihoomalu each brought in eight points apiece. The game was low-scoring until both offenses broke open in the fourth quarter. DeRouin said the Farmers “battled to the buzzer,” but Lanai held on for the win.

Molokai closed out the season at 11-1, while Lanai is now 7-4. Molokai has clinched the league’s Division II regular season title and is already guaranteed a spot at the state championship. The results of the MIL tournament from Feb. 4-7 on Maui will determine the Farmers’ placement at states.

“We finished the regular season and made many of our goals,” said DeRouin. “Now it is time to focus all our energy on the MIL Championship.”

While the Farmers did not have any meets this past weekend, the teams are gearing up for the MIL Championships on Maui Feb. 6-7.

“This is the time of the season when things are starting to gel,” said Head Coach Jess Ford. “Some of them swam at the Makahiki races on Thursday. I thought they were showing improvements in their control, in sprinting and not getting sloppy.”

Molokai will have the chance to qualify for the state championship. At an MIL meet two weeks ago, the boys’ team finished second in the 200-meter freestyle relay in one minute and 44.55 seconds, which Ford said could get them consideration for states. They’ll aim to improve that time while also gunning for state qualification in the 200-meter medley relay, added Ford. She said the girls could potentially qualify in the 200-meter medley.

“We’re gonna be working on a lot of sprints with a lot of rests, working on attention to detail,” said Ford. “When you start swimming as fast as you can, you can have stroke failures, so we’re working on holding that together.”