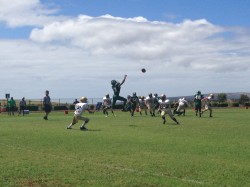 The Farmers football team’s defense came together strong in the second half of the game to win last Saturday’s home conference game against the St. Anthony Trojans by a score of 20-6.

“Defensively we came out a little sluggish in the first half, but we brought it and played ball in the second half,” said Head Coach Mike Kahale.

Kahale said the team has a lot to work on, especially after injuries on the field. Junior Alden Abafo, a defensive back and running back, was hit hard and injured in the third quarter while running the ball and sat out the rest of the game. Kahale said he’s hopeful Abafo will recover and return to the field.

With a 3-1 season record, the Molokai team will challenge Hana next at home on Oct. 11. Kahale said his team must step up its game.

“Hana’s a tough team so we have to make sure we’re ready for them,” Kahale said. “They’re playing to win, but we’ve come out victorious the past few times we’ve met. If we play like we played today we’re not going to beat them.”