A farewell to a great season and great seniors 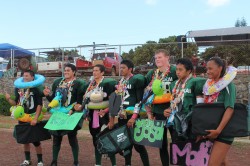 The Farmers send off their seniors after their last home game of the season. Photo by Laura Pilz

MHS Farmers Football wrapped up their season last Saturday with a close home game against Seabury Hall. Seabury emerged victorious with a final score of 25 to 14, but MHS Farmers still had a lot to celebrate and be thankful for including a growing football culture on Molokai as well as eight seniors who were recognized for their dedication to the program.

In regards to the loss, Coach Mike Kahale stated, “It wasn’t the result we [had] hoped for, but it was a lot closer than the first game we played against them.”

“We gave up a couple of big plays on the outside, tried to fight back, but just ran out of time,” he said.

“It sucks [we lost]. We worked very hard, but it just didn’t work out for us,” he said.

Coach Kahale added, “We appreciate these boys. They are all hard workers and we will be back next year – bigger, faster, stronger.”

With big plans for next year, MHS Farmers Football will continue to grow both as an organization and a team.

“We want to grow the culture of football here,” Coach Kahale said, “It’s still in its infancy and we want to build it the right way.”