Since eight-player football officially began in the MIL four years ago, Molokai has been one of the league’s top contenders. With a deep bench and many of the driving forces from last year’s team returning, this season looks to be no different. 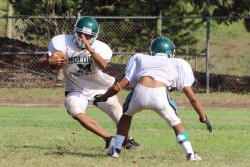 “We have got a lot of guys out there, about 40 plus, and that shows we’re doing something right in promoting the game,” said Head Coach Mike Kahale. “… We have a really strong senior class this year. A few of them have started from their freshman year.”

Last year Molokai finished 4-2 and second in the league. After coming just shy of their first-ever championship, the Farmers return motivated.

“Losing that game felt like everything was for nothing,” said junior quarterback John-Michael Mokiao-Duvauchelle. “It really struck me and my teammates, too. … I carry that motivation every single day.”

In the offseason, several Farmers attended a statewide football camp, honing their talents alongside Hawaii’s top players and learning from NCAA Division I college coaches. Molokai players and coaches have been analyzing game film and cutting down on errors, said Kahale.

“Every year we gotta come in with the expectation that this is our year,” said Kahale. “We’re gonna shoot for that championship. It’s been a little bit elusive but I feel like we’re prime.”

For the next couple of months, Molokai’s volleyball players will have to live and breathe the sport, through hours of practices, road trips and games. They couldn’t be happier.

“The strength that I see in this team is that they’re so passionate about playing this game,” said senior libero Kysha Kawano. “Some girls … during the year, they don’t see that drive anymore. I just feel like this team has a really close bond and we work well together.”

Eight players return from a squad that last year finished 6-4 and third in the MIL. The Lady Farmers raced off to a 4-0 start last year, jostling for first place with undefeated Hana and Seabury. 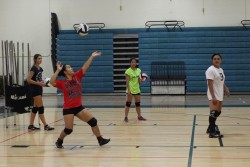 “Our thing was, we might not have the greatest talent, but as long as we work hard and put all our passion into it, then that’ll come out in the court,” said senior Cendall Manley.

Hana eventually ended Molokai’s MIL championship run, but the Farmers will get a rematch with the Dragons this weekend in The Barn. The two teams face off Friday at 7 p.m. and Saturday at 11 a.m.

Fourth-year Head Coach Mahea Rawlins said the team is well-rounded and scrimmages in practice have been lively. As the season approaches, Kawano added they’re getting players out of their shells and communicating more on the court.

“The returning players bring back a lot of knowledge. They’re able to give leadership and help out the young ones,” said Rawlins. “[The new players] are shy but they lead in their own way. They’re quick, they’re coachable. It’s easy to work with them.”