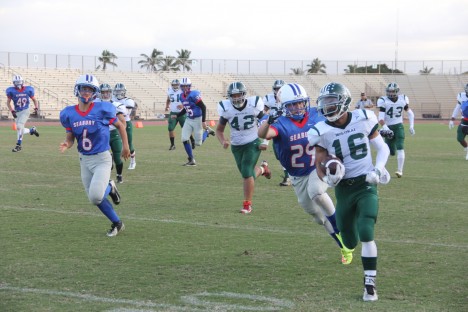 “We came out and scored on our first two possessions, then we lost our way a little bit at the end of the first quarter,” said Head Coach Mike Kahale. “But in the second quarter we played better and it’s how you respond to adversity. … I am so happy and very proud of our team.”

The Farmers came out strong and scored on their first two offensive possessions. Using a solid defense, they dominated the game against the Spartans. 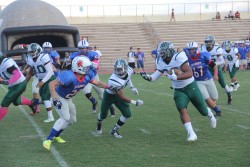 With a big crowd of Molokai supporters in the grandstand and an enthusiastic rally squad there to support them, the football team took care of business and executed on the field.

“Finally we got the job done after the past two years of coming up short and that motivated us,” said senior offensive lineman Kui Han. “We came out today, and we executed and played well and gave them some Molokai power!”

“It feels good to get this monkey off my back,” he said. “We came up short the past couple years and now we finally feel like we are on top, and I just love it right now.”

The Farmers end the year with a perfect record of 6–0 and will have a new eight-man MIL championship banner to hang proudly in The Barn. 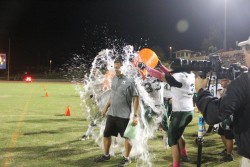 It was a big moment for the island and the high school, which went without football for more than 50 years before joining the eight-player league in 2010.

“Seabury has been on top for the past few years and they had the target on their back,” said Kahale, who revived the program on Molokai. “[Our boys] came out and did their thing and I’m just excited for our team, our coaches and our community. Thank you to all the community that has supported Molokai High School football.”