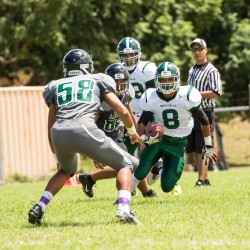 The Farmers eight-man football squad played a historic game against Lanai last weekend, winning 33-0. It was the first home game for the Pine Lads since 1953, marking the Lanai team’s eight-man debut in the Maui Interscholastic League (MIL).

In the fourth quarter, Jaymen Baagay-Cenal (pictured here) finished the game with an 85-yard run.