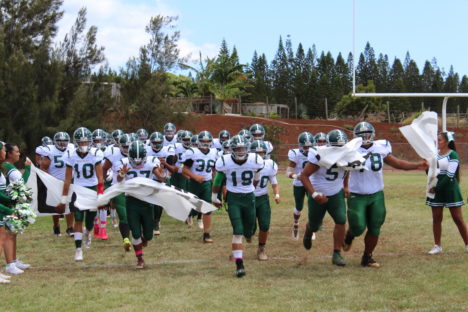 History was made last Saturday in front of a huge crowd at the Molokai High field as the Molokai Farmers won their third straight Maui Interscholastic eight-man Football Championship and hosted the event on their home field for the first time. They earned the title beating the Lanai Pine Lads 72-38 and finished their season with a perfect 4-0 record.

“We were not going to take this game lightly,” said Head Coach Mike Kahale. “Despite winning our first game against Lanai, we knew that they were playing with some momentum and confidence after beating Seabury to make it to the championship game.”

Senior Hau`oli Caparida had touchdown runs of two and four yards and also scored on touchdown receptions of 30 and 35 yards and returned a kickoff 80 yards for a touchdown.

“Being able to play in front of our home crowd was awesome and hearing the cheers and yelling when I broke free on some long runs is something I’ll never forget,” he said.

Junior Naighel Calderon had five of Lanai’s touchdowns in an impressive performance for the Pine Lads. He caught scoring passes of 55 and 14 yards and ran for a 3-yard touchdown He also returned a kickoff 80 yards for a touchdown and had an 88-yard interception return for a score.

“Congratulations to Mike and his staff, and the football boys on their three-peat championship,” he said. “Thank you to the Molokai Athletic Director Lee DeRouin, the parents, and the people of Molokai for being gracious hosts.  It was a job well done by all!”

It was the Pine Lads’ (2-2) first appearance in the final.

Kahale and his team had a game plan and executed it well. 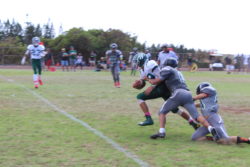 “Our game plan was to get back to the basics, execute offensively, and to stay disciplined on defense,” he said. “I was pleased with our offensive production.  We were able to stay balanced with our run/pass game and unpredictable in our play calling.  Defensively, we played them tough, holding Lanai scoreless in the first quarter and getting big stops throughout the game.”

For Molokai, it was a day to remember, hosting the championship for the first time since bringing back the football program several years ago. A new football scoreboard and a huge crowd of both Molokai and Lanai supporters, along with enthusiastic performances by the Molokai  Cheerleading squad, topped off the day, and Kahale had special words for his community.

“I really want to thank our Molokai community for their continued support,” he said. “It is a huge endeavor to run a football program and it only works when everyone comes together.  A huge mahalo to all the football parents and my coaching staff.  And especially to my wife Nichol, your vision of what could be has come to fruition.  Thank you for your continued work and support behind the scenes to sustain the program.”