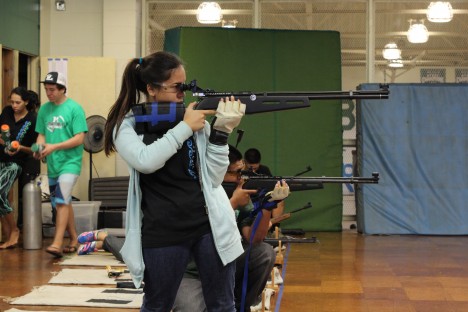 Molokai High air riflery coaches Daniel Imakyure and Chinky Hubbard have come to the same conclusion. Both men, with extensive firearms backgrounds, have peered through the sights of their students’ air rifles, taken the 33-foot shot at miniscule paper targets and come away surprised by the experience.

“I tried it out myself,” said Hubbard, the Molokai girls’ coach. “It’s not that easy.”

This season, however, Molokai High School (MHS) student marksmen are making it look deceptively simple. The Molokai boys’ team has finished first in all five meets in which they’ve competed (the team missed the first MIL meet at Baldwin), while the girls’ individual shooters are consistently represented in the top 20 in fields of over 60 students. Every MHS shooter has qualified for the Oct. 18 Maui Interscholastic League (MIL) Championships.

“These kids, they’re really good,” said Hubbard. “They’ve got good fundamentals from their previous coaches. We have some new shooters which are picking it up really well.”

Imakyure explained that some students familiar with shooting but new to the team have had to re-learn mechanics and positioning during the first half of the season, as air riflery requires different techniques from most firearms. The students have also gotten to try their hand at the program’s four new air rifles: Crosman Challenger PCPs that Hubbard said are “top of the line.” The school’s older lever pump guns require manually pumping in air before each shot, but Challengers can hold a set amount of carbon dioxide that will last multiple rounds.

Both Hubbard and Imakyure are in their first year as coaches. Amidst new equipment, new coaches and new teammates, shooters have meshed together well for a sport in which fourth-year shooter Michael Corpuz said it’s important to stay relaxed and simply enjoy the sport.

“We push ourselves hard enough to get [to our goal],” said Corpuz, a senior who has never finished lower than sixth place this season. “We bond a lot. Most of us are like brothers and sisters.”

With the MIL Championships nearing, Hubbard said that the Farmers are zoning in on prone (lying down) positioning, which is generally the easiest position in which to accumulate points, and standing, which is usually the hardest. Students are also judged on scores shot from the kneeling position. The league gives a set amount of shooting time for each position, with five minutes to “sight,” or take initial shots at a center target to ensure the rifle is shooting true. Each target includes a series of rings, with a bull’s-eye worth the most at 10 points. A good shooter, Imakyure said, will often average a score of low 90s in prone, low 80s in kneeling and low 70s in standing.

In the team’s Oct. 2 meet — a postal home site shoot that allowed schools to compete in their own gyms and submit scores to the MIL — the Molokai girls finished fifth amongst the girls’ squads, with Hiilani Kanuha earning their highest individual shooter in tenth place. The boys’ team finished first and cracked 1,000 points for the first time this season, with Jershon Kaalekahi taking first place individually. This season, the closest any team has gotten to Molokai’s 1,005-point performance was St. Anthony’s boys’ score of 961 on Sept. 27. 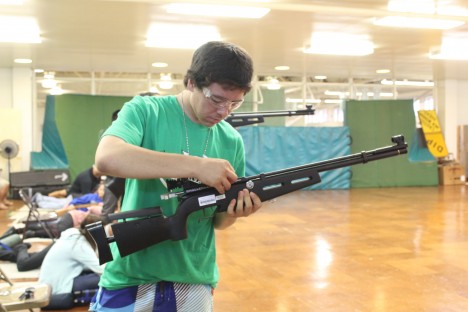 The Farmers’ have two remaining meets before the Championships: one at St. Anthony’s on Oct. 11, and another postal home shoot in The Barn on Oct. 15.

Although postal shoots have benefited MHS in multiple ways – eliminating travel costs, possible seasickness and misalignment of rifles during interisland ferry rides – junior and third-year shooter Kea`a Davis pointed out one disadvantage to not competing around other students.

If the Molokai High air riflery teams continue the pattern of success from the season’s first half, they will indeed experience the pressure of competition, this time from fellow students at the state level.