In a new series, the Dispatch celebrates former Molokai athletes who have taken their homegrown skills to new stages off island. If you know of a Molokai athlete competing at college, the professional level or elsewhere, let us know by emailing editor@themolokaidispatch.com or calling 552-2781.

The first Native Hawaiian wrestler in Wayland Baptist University (WBU) history is already making a name for herself and the small island she hails from. Just a freshman at WBU, 2014 Molokai High School graduate Rizpah Umi was named an All-American wrestler last month.

Umi earned the distinction after finishing eighth out of 29 wrestlers from across the country. Wayland, located in Texas, came in seventh overall and produced five total All-American wrestlers at the Women’s Collegiate Wrestling Association National Tournament. 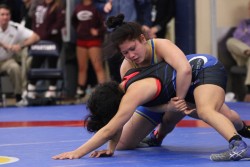 “To be an All-American as a freshman is a great feat,” said Wayland Head Coach Aaron Meister. “She competes [with] a fierce physical style, which allows her to compete with anybody that she steps on the mat with.”

Farmer fans watched Umi’s fierce style take her to an unprecedented four consecutive Maui Interscholastic League championship titles while in high school. She was the first MHS wrestler to snag that many titles and went on to four state tournaments, capped off by last year’s career-high, second place finish in the state’s 125-pound division.

However, for a girl who comes from a family of wrestlers and has been competing since she was six, coming just short of a state championship left her “hungry for more,” said Umi.

“I set a new goal of becoming an All-American,” she explained. “Coming from a small island I always knew I had to go the extra mile, and I’m proud of that, because it made me a better athlete and person overall.”

However, fulfilling her All-American dreams wasn’t always easy for Umi, who had never visited Texas before last year and had to adapt to a new style of wrestling at Wayland.

“I trusted that this is what God had planned for my life,” she said. “… Being the first Hawaiian to wrestle at Wayland Baptist University motivated me to push myself beyond my limits. … I knew when I signed for Wayland that I was entering a whole new realm of wrestling.”

Meister called Umi “respectful, confidently reserved, and extremely coachable.” No matter the outcome, he said, she always exemplifies good sportsmanship. Umi’s father Bill Umi said his daughter’s years of passion and efforts have all paid off.

“It was all her hard work. I’m just moral and spiritual and physical support,” said Umi. “We’re very proud. It’s not every day you have an All-American in your house.”

Her Molokai home is often on Umi’s mind. The wrestler said she reminisces about morning devotions with her family of 12 and is grateful for the foundation of support they give her even from far away. She plans to come back home after college to offer her talents coaching the girls’ wrestling team at Molokai High and also wants to become the first Native Hawaiian midwife on the island. Traveling with Wayland for competitions has reminded her that “nothing beats home.”

“Having not been home for almost a year now makes me really appreciate where I come from,” she said. “Molokai is a rare diamond.”