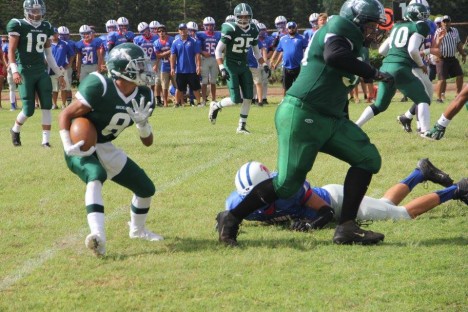 Last Saturday, Molokai’s football team did what no other school in the league had done before: defeat Seabury Hall. In three seasons of MIL eight-player football, the Spartans had yet to lose a game. However, on their home field last Saturday, the Farmers topped their undefeated archrivals 62-7.

“I’m just proud of the boys,” said Head Coach Mike Kahale. “We executed, put up some points. We finally got over that hump.”

Molokai dominated the game from the beginning in front of a big crowd, with Seabury only scoring on a long touchdown run late in the second quarter.

The Farmers started the scoring in the first quarter with a short run by senior fullback Ena Victorino from inside the 10-yard-line. Molokai went for two and completed the attempt to make it 8-0. Seabury then fumbled on their first possession and Molokai scored with a touchdown pass to senior receiver Moses Espaniola from junior quarterback John-Michael Mokiao-Duvachelle. After another two-point conversion completion it was 16-0. After a Seabury punt Molokai scored again a touchdown pass to Kaimana Kahale from Mokiao-Duvachelle. The Farmers missed the extra point but led 22-0 at the end of the first quarter. 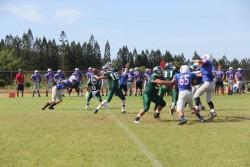 “They dominated today. They [caught] every ball that I threw,” said Mokiao-Duvauchelle of Molokai’s offense. “… I’m so grateful for have them on my team.”

In the second quarter Espaniola scored another touchdown, while runningbacks Jaymen Bagay-Cenal and Alden Abafo both ran in scores. Seabury broke through on a long run by Cole Christie to make it 42-7. However, Bagay-Cenal then caught a long touchdown pass, and the halftime score was Molokai 49-7.

Molokai’s solid defense would not allow Seabury to strike again for the rest of the game. After a scoreless third quarter, Mokiao-Duvauchelle scored on a quarterback keeper at the goal line. Freshman runningback Jayse Lalim-Rillon finished off the scoring for Molokai with a nice touchdown run late in the fourth quarter. With the point after, the final score stood at 62-7.

He added that “it’s only one win.”

“They’ll be back,” said Kahale of the defending champs. “They’re gonna regroup.”