Athletes and coaches from the MIL Champion Molokai Farmers eight-man football team were honored at half time of the Pro Bowl last Sunday. Because Molokai graduate Kimo von Olehoffen won the Super Bowl with the Pittsburgh Steelers, the Farmers are one of a handful of teams in the state that received a special commemorative football at half time of the All-Star game at Aloha Stadium.
Von Olehoffen did not play football at Molokai High School because there was no team when he graduated in 1989 but he played collegiately at Boise State and then in the pros for the Steelers, Cincinnati Bengals, New York Jets and the Philadelphia Eagles from 1994 to 2007.
The players and coaches flew to Oahu Sunday morning and the NFL provided their entry passes for the game and the halftime ceremony on the field. 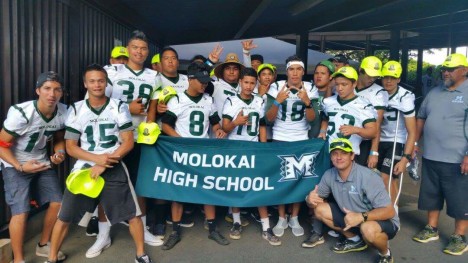 “It was a great opportunity for our boys to experience and watch a professional football game,” said Molokai Football Head Coach Mike Kahale. “The most exciting part for them was walking through the tunnel and being among the other football athletes. Yelling, screaming, and chanting. They even sang their alma mater.”
Kahale said another cool moment for the team came when St. Louis and Marcus Mariotta entered the field, walking right in front of the Molokai athletes.
It was an honor for this year’s eight-man MIL championship team to be able to go to the Pro Bowl and meet some of the All Star athletes from the National Football League and also receive the gold football offered to high schools that have a Super Bowl champion as an alumni.